Facebook Algorithms & Vaccinations: Let’s not make Everything about Republicans versus Democrats. 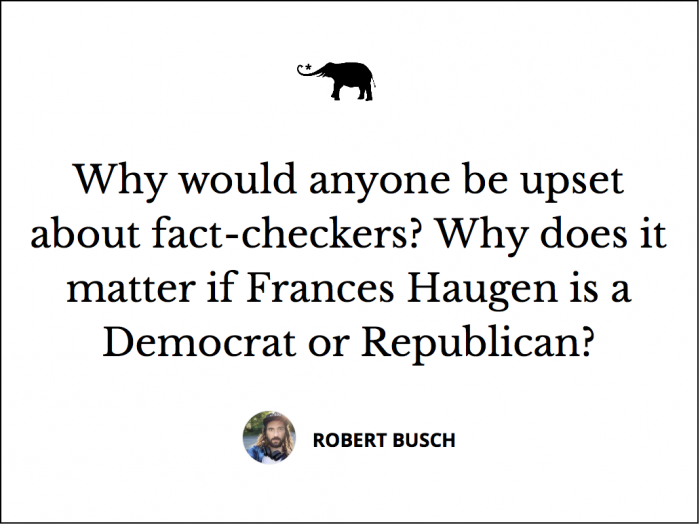 We saw what happens when we mix politics into a pandemic—let’s not make that mistake again and keep party politics out of the current social media debate.

I just read an article on how Portugal managed to get almost everyone vaccinated by now. The answer is pretty simple: they didn’t make it about politics.

Looking at the United States, we see a different picture. There is a strong connection between political preferences and opinions on masks and vaccines.

There are folks on both sides arguing about a health crisis, and it’s painful to watch. Because there are no two sides to this. Imagine we would start a political debate after watching the weather report—it just doesn’t make any sense.

Public health is not about politics; it’s about common sense. There are doctors and virologists who spent their entire life on research with no political agenda in mind—at the same time, we have internet users who feel entitled to oppose the views of experts because of the so-called information they found on the internet.

These folks love to share what they found online without even thinking about the consequences. Several athletes, celebrities, and politicians pretend to “only ask questions” and “add some information” here and there—but what they are actually doing is playing political games.

Senator Josh Hawley is a good example of that behavior. He sheds crocodile tears about the FBI silencing parents who want to share their concerns around masks and vaccines—what he doesn’t mention is that these parents are actually threatening other parents and teachers with violence.

And we see the results of that. President Trump argued against masks, Hawley defends aggressive parents, and America’s Frontline Doctors offer talking points to fans of conspiracy theories.

Imagine how folks in Portugal feel when watching this sh*t show.

With all of that in mind, we should do our best not to make the same mistake in the big conversation that we are about to have—how do we regulate social media?

I already saw comments on my recent articles because I was asking for immediate action against the spread of fake news. People are worried about freedom of speech, feel silenced, or worry about the future of democracy.

Really? Why on earth would we turn this into a political debate? It has nothing to do with politics—or better said, it shouldn’t.

It’s one thing to be Conservative and another to promote misinformation. If someone believes in trickle-down economics and wants less social welfare, that’s fine with me, and we can agree to disagree. Why would anyone argue in favor of misinformation?

Frances Haugen testified at a congressional hearing that Facebook algorithms are designed to trigger us and cause heated arguments. She explains how content creators are almost forced to play along. And it didn’t take long before Conservatives saw themselves as a target of this conversation. Really?

Why would anyone be upset about fact-checkers? Why does it matter if Frances Haugen is a Democrat or Republican? Shouldn’t both sides prefer political debates that are actually based on reality and not on conspiracy theories?

Apparently not—and that is pretty shocking, in my opinion.

A virus is something that doesn’t go away because the majority of people don’t believe in it—we can’t vote against a pandemic just like we can’t vote on the weather. The same goes for misinformation.

Misinformation is not a topic that offers two valid standpoints—and that goes for both sides, Liberals and Conservatives.

I understood the idea to make a point by exaggerating an argument. Sometimes it can be helpful to simplify an argument to get more people on board—especially when we are convinced to be on the right side of the story.

But that’s not how politics or arguments in general actually work. We can’t argue about a problem when half of the population pretends or really believes that it doesn’t exist. We can agree to disagree on how to solve a problem, but denying the problem doesn’t help anyone—and is actually pretty disrespectful toward those who have a problem. The Black Lives Matter movement is a good example of that.

And now, as we talk about online hate, we see the same situation. We can disagree on how to regulate social media, but is there anyone out there who really thinks that there is no problem with fake news and lack of respect toward each other when arguing online?

Is there anyone who actually believes that we can just continue without making any changes? Or is it just an attempt to protect the status quo that benefits certain interest groups?

We already f*cked up by turning public health measures into political debates; let’s not make the same mistake again.

We can agree to disagree on many topics, but we should also be able to find common grounds that enable us to have conversations that actually solve the problems of our time instead of denying them.