Men need to Step Up to Eliminate Male Gender Violence.

“We hear politicians constantly saying sorry – but sorry doesn’t wash anymore. They have the power to do something about this and at the very least we need an independent inquiry.” Deputy Leader @TabithaMortonWE for @BazaarUK https://t.co/LjSqIojkXb

After a series of especially horrific murders by men of women in the United Kingdom in recent days, including one by a serving police officer, male gender violence has become headline news.

It is something that is long overdue in the eyes of many women and women’s support groups.

As a man, I always find these kinds of stories painful to read, partly because I get a vague sense of shame hearing the harm that other men are capable of inflicting, and partly because I want to take some kind of action but I’m not always clear what I can actually do to help end male gender violence.

I think a lot of men have similarly mixed feelings. So, we look the other way and just hope that somehow things will improve or that women can sort it out.

Meanwhile, more and more women are insisting on changes to the law so they can be better protected, and there is a growing awareness on the part of the police and the government that something urgent has to change so women can begin to feel safe walking the streets and in their own homes.

This is something that should be a basic part of any society that claims to be civilised. It’s left politicians scratching their heads about how best to address this enormous (and apparently growing) problem.

Judging from the depressing statistics on the levels of male gender violence and the amount of violent pornography that is downloaded on a regular basis, it’s a tragic reality that a significant number of men are capable of, and drawn to, the possibility of hurting women. But nobody seems to be talking much about advancing our understanding of why this is the case.

Perhaps it’s the fear that attempting to explain male violence would seem like trying to excuse it, which would quite rightly be a political no-go. But without funding the research needed to give us a better understanding of this issue, as with any dis-ease, we can’t know what will be effective in preventing it. 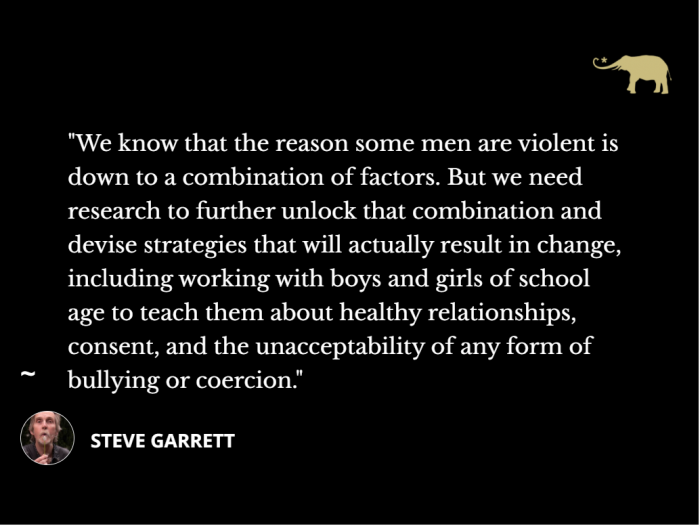 Most of the talk from the police and politicians is about protecting women from men, and that is essential, but to my mind. We also need some kind of research-informed prevention program that can reduce the risk of men behaving violently, and at the same time, a profound change in the aspect of the male culture that doesn’t take misogyny seriously, and in that sense, it tacitly condones or encourages it.

It’s in this latter area where I believe all “good men” can, and should, play a part by facing the reality that this is a “men’s problem,” and we need to be part of the solution.

If we’re afraid of being ridiculed or attacked by other men for standing up more visibly for women’s right to live without fear, then it’s time for more of us to “man up.” We can do this by refusing to let any sexist remark or joke go unchallenged because although they might seem trivial, they all promote the misogynistic mindset that is at the heart of male gender violence. If we’re serious about being women’s allies in eliminating it, we must also make sure that we’re not replicating or benefiting from it or from any sense of entitlement that comes from the unequal distribution of power in a male-dominated society.

At the same time, we need to lend our voices to challenge any suggestion that aggressive and sexist male behaviour is innate and harmless in a boys-will-be-boys kind of way. It was shocking to read that none of the colleagues of the policeman who has just been convicted of rape and murder thought it was a cause for concern that his nickname was The Rapist, apparently because he made women feel uncomfortable.

The wider tragedy of a macho culture is that in addition to it being demeaning and potentially harmful to women, it creates stress and unhappiness for men. As boys, we are conditioned to fit into a “man’s box,” in which only a few emotions like anger are acceptable, and where we have to pretend we never feel any sadness, vulnerability, or fear.

Of course, we all feel those things and the result is self-hatred and shame that then gets projected onto others, often women, and becomes a real obstacle to mutually respectful and healthy relationships. And it’s hard to feel we can be relied on and trusted by our partner when statistically, the chances are that she has been assaulted by a man at some point in her past.

We know that the reason some men are violent is down to a combination of factors. But we need research to further unlock that combination and devise strategies that will actually result in change, including working with boys and girls of school age to teach them about healthy relationships, consent, and the unacceptability of any form of bullying or coercion.

This educational work is urgently needed because apparently, many girls at the secondary school level are being abused by their male peers while the schools often fail to deal with it effectively because they don’t know how to or they’re not given the resources.

We must provide more support to families who are under stress to make sure that every child has the best possible chance of experiencing and learning about mutually respectful relationships, and because abusive parenting can create children who grow up to abuse others.

I also think that there’s an urgent need to create more safe places where a man can go to receive counselling support without shame if he feels unable to control his anger, or if he’s having any urge to act aggressively toward his partner or any other woman. A place where he can speak confidentially about his feelings so that some kind of intervention can divert him from causing harm.

Violent men often have a range of other mental health or addiction problems, but there is almost no support available to them until they have committed a crime. And by then, it’s too late for the victim.

By “being the change” in my own life by refusing to remain silent if I encounter woman-hating words or behaviours and joining in with women to put pressure on the government to deliver stringent legal deterrents coupled with research and support services, I hope to work with other men. I hope to lean on my male friends if they try to suggest that it’s not also their responsibility.

I hope to create a world in which every woman feels safe, and every man can be proud of that fact.

Steve Garrett a.k.a. “Stainless” Steve, is a Wales-based writer, poet and musician. He  is passionate about gender equality, and has published four books of poetr… Read full bio