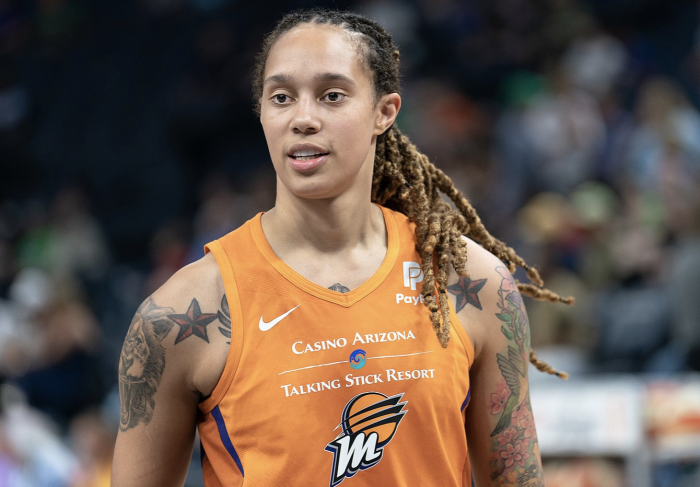 There is so much to unpack that I don’t even know where to start. Let’s try.

For those of you who don’t regularly watch women’s basketball: Brittney Griner is probably the most successful female player of all time. She got several awards as the best player in the WNBA and won two gold medals for Team USA.

But, as you might have heard before, female basketball players are not making that much money in the United States. There is a huge gender pay gap, which is the reason why many athletes play abroad during the off-season. Griner had been playing for a Russian team since 2014.

The fact that female athletes make more money in Russia than in the WNBA is already troubling, but this is just the intro to an extremely dramatic story.

Griner was detained in Russia a few weeks ago—and we just found out about it.

Do you remember how we got live updates on Novak Djokovic when he was detained in Australia? So, why did we not hear anything about this when it happened?

But this is not about her vaccination status; this is about alleged drug trafficking.

And that’s where this story gets really wild.

So, we have an athlete who traveled to Russia for the last eight years accused of drug trafficking? A Black and openly gay woman who tried to smuggle drugs into Russia? Really?

Oh, let’s not forget that Griner is also a supporter of the Black Lives Matter (BLM) movement. She upset Conservatives by asking the WNBA in 2020 to stop playing the national anthem before the games.

Maybe that explains why her story is already creating controversy on American social media. Griner’s fans ask Joe Biden to immediately help her, while Conservatives blame Griner and don’t even question Russian authorities.

Normally, we would expect public opinion to support an American athlete in Russian detention, but this case seems to be different.

Of course, it’s possible that Griner thought that she was okay to bring cannabis products to Russia, but there is also the possibility that Russian authorities set this up. Russia has a history of planting drugs on foreigners to arrest them.

Either Griner is extremely stupid, or she is the victim of international politics.

Russia is known to be pretty strict when it comes to drug offenses. Small amounts of weed can already lead to huge fines and a few days in prison. But Griner is accused of carrying several cartridges of highly concentrated oils, which puts her in danger of spending the next 10 years in a Russian jail.

Of course, one could argue that she might insist on consuming cannabis products when living abroad, but why would a millionaire try to smuggle drugs herself? Why would she take this risk?

The only explanation for doing this would be if Russian authorities looked the other way the last times she entered the country. Maybe they tolerated her behavior as a condition to have her play in Russia?

We don’t know any of that yet, but it’s hard to believe that an American athlete gets detained a few days before the Russian invasion in Ukraine.

It’s just too good to be true from a Russian perspective.

Any other athlete would probably rile up public opinion against Russia, but this case is different. It hits right into the divisiveness we see in the United States these days.

If Putin wanted to create controversy that divides the American public, this is the perfect story. There is the MAGA crowd blaming Griner and believing Russian authorities (reminds me of the time when Trump trusted Putin more than the CIA), and there are Liberals who support Griner and question Russian authorities.

And if that wasn’t enough, guess which Senator is representing the home state of Griner? It’s Arizona’s Kyrsten Sinema.

I just hope that Griner safely returns to the United States, but that’s pretty unlikely to happen anytime soon. But maybe, just maybe, American Conservatives could not take sides with Russia on this one? Is that really asking too much?

It doesn’t matter if she was stupid enough to carry these drugs or if she was set up. Nobody should spend 10 years in a Russian jail because of cannabis—especially not an openly gay woman who is Black.

Anyone not seeing a problem with an LGBTQ+ activist in a Russian jail is probably closer to Putin than to the core values of a free society.

Dear Republicans, do you really want to take sides with Putin because you are upset about a Black Lives Matter activist?

That’s exactly what he wants you to do. Please keep that in mind.