Why you should Never Order a “Chai Tea Latte.” {Recipe} 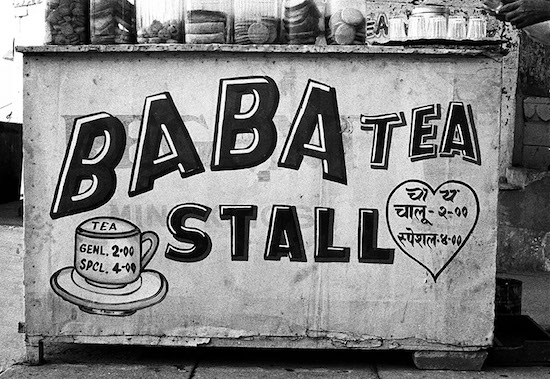 Elephant publishes all kinds of recipes—vegan, paleo, keto, anything. We do so because our readers have all kinds of diets and we want to reach beyond the choir to remind all of our readers that—whatever your diet—plastic-free, local, organic, good for the planet and for yourself is important. We do encourage our readers to try vegan once a week. ~ Ed.
~

Every time I hear someone order a “chai tea latte” in line at any local coffee shop, I cringe inside.

It’s the same reaction I have to so many other misappropriations of yoga, Ayurveda, or general Indian culture in the West.

And, in this case, it amounts to being triply redundant.

Okay, I’ll admit I may be equally annoying with my dry-cap/double-macchiato order: half espresso, half foam. And they never get it right. I always leave reminding myself why I should just make it the way I like it at home.

So yeah, when it comes to my coffee, my chai, my yoga, my kirtan, or most anything else Indian, I can be a snob. I’ll own that. I hope that you’ll laugh with me for it and continue to indulge me here.

Because, although I’m not Indian, I’ve spent a total of 108 months there in the past 16 years, the last 80 continuously between 2010 and 2016. This may not make me any sort of authority, as I’m usually still the foreigner around here, but I can proudly say I’m not as foreign as most.

So, with my modest batch of experiences stuffing all my pockets, I’ve got to speak up. Being back here in the West again is like witnessing an awkward mash-up of two worlds—the “future” of India and the “past” of India—colliding. I see Westerners adopting Indian (yoga) culture without fully understanding it beyond the surface they are attempting to use the wrong tools to break—“commodifying” and “buying” it, really. In all irony, this is what modern India is similarly doing with the “spiritual industrial complex,” capitalist model of the West. Having watched Western countries profit off ancient knowledge, they want in.

Clearly quite complicated, these are much deeper critiques we are not ready to get into yet, as we are truly just meeting.

I have learned, through navigating the comparatively slow workings of Indian bureaucracy, that before discussing anything of importance, we must first have the sort of small talk that accompanies the sudden arrival of any guest. And in India, as you, dear reader, are my guest, it is customary that I first offer you a cup of chai—not a chai tea latte, not chai tea, just chai.

Allow me to explain:

Chai literally means tea in Hindi and, although the recipe may vary among chaiwalas, yogis, and householders, from region to region, a standard authentic chai is usually a mix of water, real whole milk, black tea, and plenty of sugar.

I prefer to offer you a special chai, as road side chaiwalas call it, essentially what Indian restaurants in the West call masala chai (masala merely meaning spice). And, as with most Indian and Ayurvedic cooking protocols, making a great chai is as much about the order in which you add the ingredients as it is which ingredients you choose to incorporate according to season and climate.

I prefer half water to half milk proportion, maybe even a little more milk than water. And, luckily, I have a local source for real raw cow’s milk, yum! Yes I said it, raw milk, not soy, not almond, but real unpasteurized milk. I’m sorry vegans, I must admit, I don’t believe that dairy is bad for us and chai just isn’t the same with skim or two percent, much less any milk substitute. Just sayin’.

A note about portions: why not super size this?

Remember the black tea in chai is caffeinated, some say even more so than coffee. In my experience in North India, especially in sadhu circles or ashrams where guests are frequently coming and going, chai is something that is offered several times throughout the day. This is understandably compensated for by the size of a typical portion. One chai at someone’s house, ashram, or chai stall would be a mere several sips—not a typical American sized mug of coffee and definitely not a grande latte.

When I’m on my own, though, I may only have one or two chais a day, so a normal sized coffee mug does just fine.

And sugar? Really? But why not honey?

In all the Ayurveda courses I’ve ever taken in India, the most frequently repeated principal was “never cook with honey, never add honey to your tea!” Every time, without fail, this statement is received with resounding gasps among Western students, because most any foreign-friendly café in India will offer hot lemon ginger with honey as a popular alternative to caffeinated drinks.

But really, I am as serious as my Ayurveda teacher is every time she repeats this: “Do not put honey in hot things!”

Now, I didn’t study the seven years she did, so I may not be able to explain it scientifically, much less via Sanskrit principals, but I can say how I understand it: that something apparently happens to the honey when heated that makes it indigestible, so much that it never gets fully eliminated from the body. So all those honey lemon ginger hot drinks I’ve had in the past won’t kill me, but all in moderation. If I had one twice a day, every day of my life, I wouldn’t like to see what the result may be. And no, my Ayurveda teacher reminds us, there is no detox for that.

So now that we’ve gotten that out of the way, the following recipe will make two cups of chai, one for you and one for me:

Just multiply the proportions accordingly for each additional cup. Also note there are no set rules. After several times making your own chai, you will come to know your particular taste and how much of the following ingredients you prefer.

Let’s begin, chalein (shall we)?

Crush the following ingredients and bring to a boil in water (one mug of water for every two servings of chai): 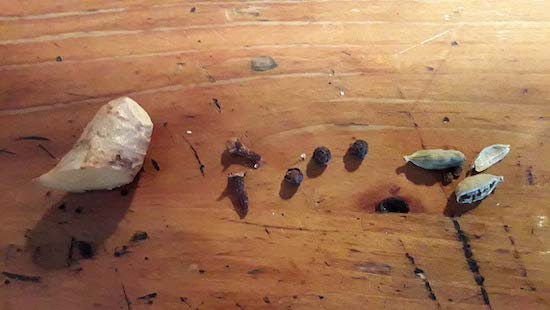 In wintertime, or Kapha (cold and sluggish) season:

• Ginger—about a thumb sized piece, washed and peeled.
• Clove—1 or 2 pieces
• Black Pepper—2 or 3 pieces
• Cardamon—1 or 2 pieces
• Raw Sugar—small pinch (between three fingers) or one teaspoon per serving

In summertime, or Pitta (fiery and active) season:

Once boiling slightly, add a small pinch (between three fingers) or one teaspoon per serving of black tea leaves.

Then add as much milk as you added water, which will cool it down again. 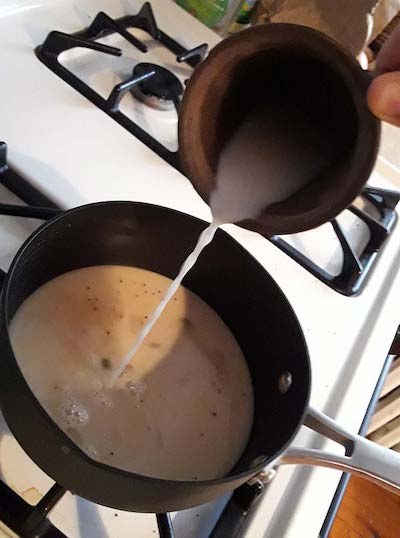 Bring the concoction to a boil once more, gently lifting the pot a bit above the flame as the chai begins to rise to the top of the pot. Do this a few times, without letting it boil over (you may not enjoy cleaning the stove afterwards, if you let it). This will make the milk caramelize a bit (something that just doesn’t work with skim, two percent, soy, or almond—again, just sayin’). 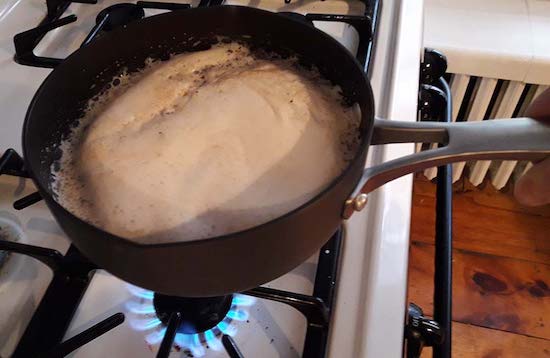 Pour it over the sink (you may spill, I usually do) into your cups using a chai channi (tea strainer). 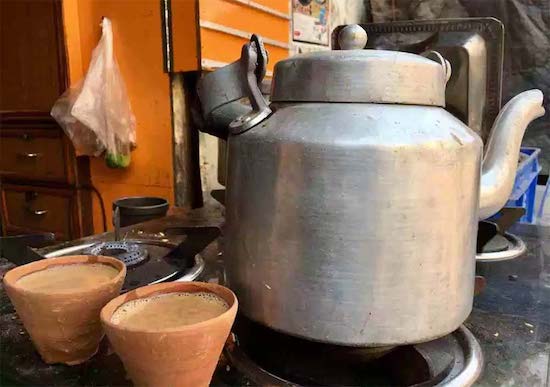 When not to have chai and what to have instead?

In Ayurveda, almost anything can be as much a medicine as it can be a poison.

So, for example, if my tongue is heavily-coated white (a few days in a row), or I have a stuffy nose that comes with a cold, I will most likely take a break from dairy products. And frankly (as I mentioned before) chai with soy or almond milk just doesn’t do it for me.

So I will make a traditional Garhwali Himalayan drink called Kahda (pronounced kar-da), which is basically all the spice ingredients minus the black tea and milk.

You can mix and match the following to taste (crush and bring to a boil):

There you have it, my chai “recipe” along with its vegan-caffeine-free alternative; my surface commodity piece, fit for consumption.

I hope you’ll try these recipes at home. And more importantly, I hope you’ll get hooked on it like the caffeine and sugar intends and come back for another round of conversation over chai.

I hope that as I slowly serve you more insights into the Indian (yoga) culture I have spend so much time diving into, in small digestible portions, our trust in each other will grow (as we dialog through the comments) and eventually I’ll develop the confidence to continue to share my words, as much as you’ll develop the stomach to digest what I really have to say. 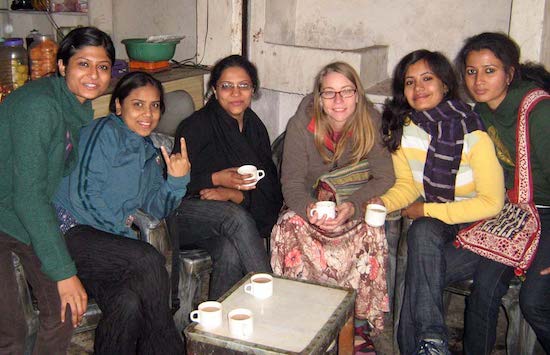 “When a barista takes a milk jug out of the fridge with pre-made chai and pours it into a cup to microwave, a thousand souls refuse to be reborn.” ~ my friend, Alka Dev
~ 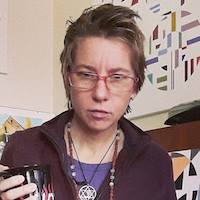