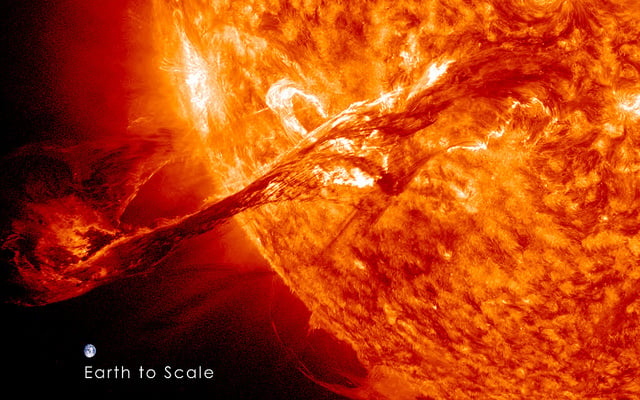 “The day science begins to study non-physical phenomena, it will make more progress in one decade than in all the previous centuries of its existence. To understand the true nature of the universe, one must think it terms of energy, frequency, and vibration.” ~ Nikola Tesla
~

Cosmic energy has been at an alarmingly high intensity for some weeks now, and it is likely that many people are feeling frazzled and exhausted. Here’s how these solar storms may be causing anxiety and fatigue — and what to do about it.

People may be currently wondering how much more of it they can handle—and unfortunately, this isn’t settling down any time soon.

Currently, there is a large, 200,000-kilometer wide, canyon-shaped coronal hole that has opened up in the sun’s atmosphere, dividing almost the entire Earth-facing hemisphere of the sun.

From this hole, on Tuesday, March 13th, a stream of high-speed solar wind (hot plasma) was ejected, and flew toward Earth at a speed faster than 600 kilometers per second. The highly charged wind has been buffeting Earth’s magnetic field (protective bubble) ever since. 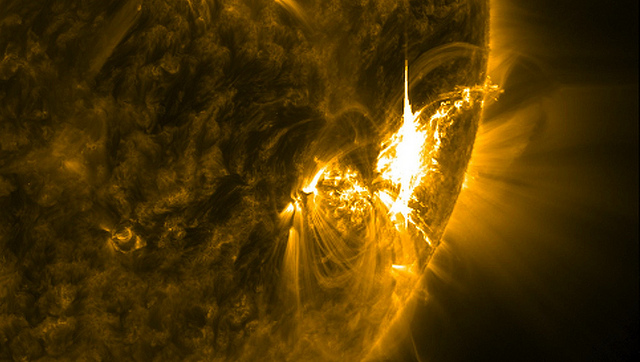 What Are Solar Flares — And How Do they Affect Us, On Earth?

Solar flares are sudden flashes of brightness that are gaseous eruptions from the sun. They release vast amounts of tremendously hot, high-energy particles and gases that eject thousands of miles from the surface of the sun. The amount of energy it takes for a flare to shoot out is equivalent to approximately 160,000,000,000 megatons of TNT.

However, the Russian Academy of Science predicts that there is worse to come. Their forecast shows that they are expecting major geomagnetic storms from March 21st to the 26th.

Solar storms temporarily disturb the Earth’s magnetosphere, as solar winds and flares interact with Earth’s electromagnetic fields. Humans are also affected because we each have a personal electromagnetic field that surrounds us—an aura. Therefore, in the same way electromagnetic energy affects our planet, it can also play havoc with our own energy fields.

See also The Secret Power of (Everything) In the Energy Field

Although we are somewhat protected by Earth’s magnetic field, the intense, highly charged energy is believed to have a major affect on everything that exists on Earth and can greatly impact anything from emotions to electrical devices.

How Solar Storms Work with the Universe’s Energy

Solar storms are known to have a huge impact on radio communications, navigation/GPS systems, technology, and living organisms. Solar energy has been shown to change blood flow, boost adrenaline, and affect blood pressure. It also affects our sleep patterns, as mentioned previously.

One of the reasons we may currently be experiencing a peak in solar activity is that on March 20th and September 23rd each year, the Earth and sun line up so that day and night are approximately equal in length. Equinoxes are known to cause cracks in Earth’s magnetic field which stay open for hours.

These solar storms are coinciding with the formation of the “equinox cracks” which many scientists believe form semi-annually during the equinox. This will open up a portal to allow the highly vibrating energy to flow in from the universe and directly impact energetic particles on Earth, including humans.

A portal allows rapid travel between dimensions of two distant locations in the universe, for example, from the sun to Earth. The portal is a temporary period of life-changing transformation which allows us the opportunity to experience with a full, conscious awakening through renewed energy, limitless possibilities, higher wisdom, increased levels of love and wisdom. This is a tremendous opportunity to align with the universe’s energy.

During solar storms, masses of luminous energy infiltrate Earth’s atmosphere, and absorbing it can be over-stimulating; so we may notice our energy—and that of people around us—feels super intense, like everyone is extra irritable, emotional, anxious, fatigued, spacey, or stressed. This is likely due to the fact that we are currently in the midst of these powerful solar storms that are emanating powerful electromagnetic energies.

Solar storms are known to desynchronize our circadian rhythm, which is the internal biological clock that controls our sleep and wake times. Our pineal glands are affected by this electromagnetic activity and produce an increase in melatonin—thus disturbing our sleep and impacting our intuition. We may have enhanced intuition and psychic awareness.

Solar storms are also believed to directly impact our nervous system, causing us to feel extra edgy, cautious, and feisty, and as though we are running on adrenaline in “fight or flight” mode. When these storms occur, we can find ourselves spun out or agitated without knowing why. We may also notice that our senses are on high alert, and that everything feels and sounds louder, brighter, stronger, and more vivid than normal.

Research has found that geomagnetic storms can have a huge effect on our emotional, mental, spiritual, and physical health. Peaks in increased anxiety, depression, bipolar disorder, fatigue, and nervousness have been found to coincide with solar activity.

This can be so extreme that many people will feel as though they have entered a new reality as they leave behind their old, outdated thoughts, emotions, and beliefs. The transformation can be so powerful that it can propel people to leave any relationship or dynamic that is causing them pain or destruction.

This is similar to the “ascension flu” that occurs when someone is going through an intense awakening period and their body is transcending from a physical one to a “light body.”

The divine light that radiates toward us during and after solar-flare activity is thought to allow us to move quickly toward ascension, which may cause us to experience any of the following:

>> Having difficulty focusing, experiencing confusion, or having a “foggy mind.”

>> Feelings of intense hunger or thirst.

>> Heightened awareness, enhanced intuition, having insights that seem to appear out of nowhere.

>> Physiological symptoms may manifest, such as, flu-like symptoms, ear ringing, or aches and pains.

>> Seeing and feeling energy such as orbs, sparks, or flashes of light, noticing energy warming the palms of hands.

>> Appreciation that all life is sacred.

>> More consciously aware of other people’s energy fields and highly sensitive to negativity.

How You Can Ease Unwanted Symptoms Caused By Solar Storms

Geomagnetic storms are intense transformational periods that can bring mind-opening awakenings and reconnect us to internal and external universal knowledge and wisdom. To ensure we resonate with this higher energy so that our vibration is raised, we can combat the effects of solar activity by resting and taking time from our busy schedules to do the following:

>> Meditate and remain aware of reoccurring thoughts and feelings.

>> Consume high-vibrational foods, such as fruit and vegetables.

>> Remind yourself that everything in the universe is made up of energy and that conscious thought and intention can instantly alter how we think and feel.

>> When possible, temporarily disconnect from technology and anything or anyone where the energy is toxic and draining.

The frequencies emanating from the solar storm are believed to cleanse and purify our system so that we can be free from toxic emotional, mental, spiritual, and physical blockages. Therefore, many of us will become aware of issues from our past that are resurfacing in order to gain our attention—ultimately so that our open emotional wounds can be healed.

It is vital that we do not repress these memories further, as failure to tend to our energetic injuries will cause them to replay in various ways, mostly by keeping us caught in painful and turbulent relationships.

These solar storms are coinciding with March’s new moon, so deep inner work will be essential over these next few days; to find out more please click here.

Overall, we are receiving an opportunity for major personal transformation—to remove blockages and old patterns, to realize and manifest our purpose, and to expand our conscious awareness. If we are willing to actively attune and integrate this cosmic energy, instead of fearfully resisting it—and if we are able to remain positive and open so that we adapt at a fast pace to the constant changes taking place—we can take advantage of this opportunity.

During intensive energy shifts, it is highly recommended to regularly cleanse our energy field at the beginning and end of each day by meditating or spending time alone.

Solar wind streams cause auroras or Northern Lights to occur, so there is a high possibility they will be witnessed around the Arctic Circle over the next few days. They can usually be seen an hour before sunrise, or approximately an hour or two after sunset.

Click here to read a credible study on the effects of solar storms on human behavior.

Disclaimer: If you experience any of the symptoms listed here, please also seek the advice of a medical professional. The above symptoms are commonly noted during geomagnetic storms, however, there may be other medical-related causes.