Lyrid Meteor Showers: why we Should Wish upon a Star. (April 22nd to 25th) 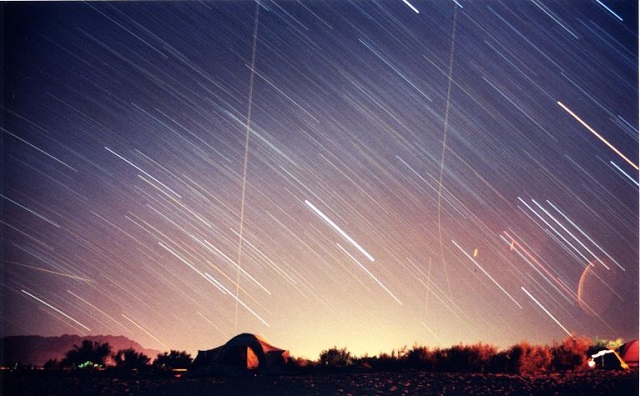 The annual Lyrid meteor showers will peak early on the morning of April 22nd.

However, if we miss this shooting star show, there will be more opportunities to catch it, as it continues until April 25th. The moon will be waxing during this period, so although its crescent beam will be visible, the sky will still be dark enough to allow us the chance to witness this impressive spectacular celestial event.

Everything that exists within our universe has manifested from source energy, which is also known as “metaphysical energy,” “prana,” or “chi” (universal life-force energy). Since ancient times, comets—or any entity lighting up the skies—have held spiritual meaning, as they were believed to be divine messengers sent from the cosmos. Every particle of light we see is made up from photons, which are believed to hold multi-dimensional energy travelling through space containing data and information possibly from millions of years ago.

When we have the ability to sense and decode the messages hidden within light particles, we then open up to the highest level of consciousness, awakening, and enlightenment. This process is known as ascension, as we transcend the physical state and communicate with the non-physical by absorbing and channeling highly charged energy through our chakras.

Metaphysical is a word used to describe life-force energy that is not physical; therefore, it is not always possible to see it. Unfortunately, when we rely only on our five senses, we miss out on a huge part of our human experience, as non-visible energy is vital, intuitive life-force energy, full of wisdom and knowledge that can guide and transform our lives.

Many people have lost their connection to spiritual energy, due to placing focus and importance on the material, physical world. However, when we are consciously aware and open to the energy incoming from the universe, we have the ability to invoke it, absorb it, and channel it so that our levels of consciousness rise, and also that of our entire planet.

Cosmic events are embraced and celebrated by many as periods of spiritual awakening or cleansing; those who are highly sensitive to energy often notice that whenever something occurs close by in the cosmos, they experience enhanced intuition, vivid dreams, premonitions, heightened emotions , and their physical body feels as though it is vibrating highly. This may cause them to feel irritable or fatigued due to the energy shift occurring, which is believed to result in cellular changes and DNA upgrades.

When we perceive ourselves as energetic beings of light with no separation or limitations, our energy is elevated immensely, and we gain access to infinite possibilities and opportunities.

One of the main things we notice during an energy shift is that we start to look for deeper meaning in our lives, and the reason for this is that we are pushed to recognise our mission here on planet Earth. We also find that we are put in situations where we are forced to discern whether our intentions and motivations are authentic, and if we are in alignment. Even if we have already decided upon the course of action we need to take to achieve our soul’s purpose, cosmic events shake us up so that anything that is not aligned with our plans falls away, and we can go on to be lighter and freer in all that we do.

This is often why people feel anxious and irritated during solar storms, full moons, eclipses, planetary movements, and meteor showers—as a window, known as a portal, opens up so that we see our lives and those around us with clarity, and we particularly focus on our intimate relationships. Whenever there is cosmic activity, the illusions fade away and the masks that people wear come off, so we are able to see our entire existence clearly—and sometimes it is not a pretty sight. However, this offers us the opportunity to detox and clear out anything or anyone that is harmful, or that holds us back.

It is believed that shooting stars (which are visible as meteor showers) have metaphysical energy that contains a vast amount of data, dating back millions of years. Some also believe that the light we see is an angelic entity from a higher dimension that travels toward our planet at immensely high speed. This is the reason the phrase “wish upon a star” is used, as it is thought that when we make contact with a travelling star (angel), our consciousness interacts with its powerful metaphysical energy; thus, our wish will come true. This weekend we will receive the opportunity to put it to the test during the mesmerizing Lyrid meteor showers, but only for those who have unfolding faith in it and believe that what they wish for is possible.

The Lyrids, one of the oldest known showers—with records dating back approximately 2,700 years—are fast meteors that produce trains that streak across the dark sky and can last for several minutes.

“The streaks of light we see from burning debris during a meteor shower are the leftover material from a comet that originated in the outer parts of our solar system. We are essentially seeing a remnant of the early formation of the sun and our planets and also the destruction of material that was formed five billion years ago, as old as the oldest rocks on Earth.” ~ Christopher Conselice

Lyrid meteors are made up of chunks of rock the size of a grain of sand or a small pebble. However, they’re able to brilliantly light up the sky because they hit Earth’s atmosphere at such a high speed—roughly 110,000 miles per hour.

If we are lucky, we will see these ionized gas trails of fire, which are around 50 to 70 miles above Earth’s surface, and if you listen carefully, these bright pulses of light generate popping and hissing noises. When these meteors hit Earth’s upper atmosphere, the glowing trails light up the sky before vaporizing.

Meteors are named after their radiant—the starting point of the particles we see. Although meteors can appear to be coming from anywhere in the sky, each component of a given meteor actually generates from the same point if you trace their path line back. In this case, the radiant is Lyra.

The Lyrid meteor showers happen when the Earth passes through the Thatcher comet’s orbital path—a comet that only orbits the sun once every 415 years. The orbital path is a region of the solar system where this comet has spread much dust and debris during its long, elliptical route. When Earth passes through an unusually dense clump of a comet’s rubble, there is a surge in the number of showers.

If the sky remains cloudless, and there isn’t too much light pollution, we can witness the Lyrids with our naked eyes from any location in the world, so we shouldn’t need binoculars or specialised equipment.

There will be as many as 15 to 20 separate showers falling from the sky every hour, and we may see up to 100 showers. For a higher chance of seeing more showers at their brightest potential, head to the countryside or find a dark place free from artificial light, as glows may obscure the view.

Wrap up in warm clothing, take a hot water bottle, hot drinks, and a blanket along, so you can lie flat out and absorb the electric vibe in the atmosphere. With a relaxed gaze, look up at the sky toward the blue-white star Vega, which is the third brightest visible star in the sky in the Northern Hemisphere, and try not to focus too hard on one particular area. Anytime after midnight or a couple of hours before dawn is the optimal time to head outdoors to view the Lyrid showers.

How to See the Stunning Lyrid Meteor Showers.

Mindful bonus: “5 Mindful Things to do each Morning.”