How I Redefined Home by building my own Tiny House. 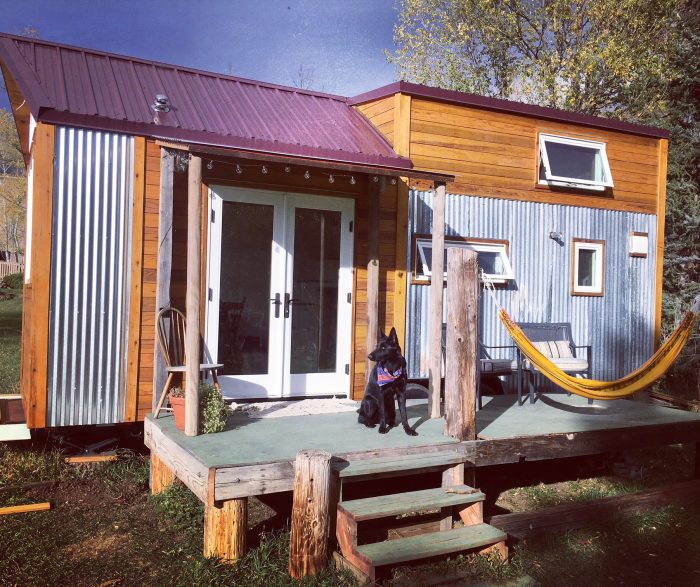 I’ve always wanted to build my own house.

I think the desire came out of a space of knowing, in a deep way, the feeling of home, and all of the ways that it can be yours. I fortunately grew up in an insanely supportive household where projects were the norm, and the pursuit of creativity and happiness was a thread throughout my upbringing.

After traveling all over the world in the front and backcountry, certain common desires of settling down arose each time I returned from an adventure. I moved home to my parent’s house in Colorado after several months abroad and found myself at a crossroads where I had no life direction except for a burning desire to create something I longed for deeply—my own home. 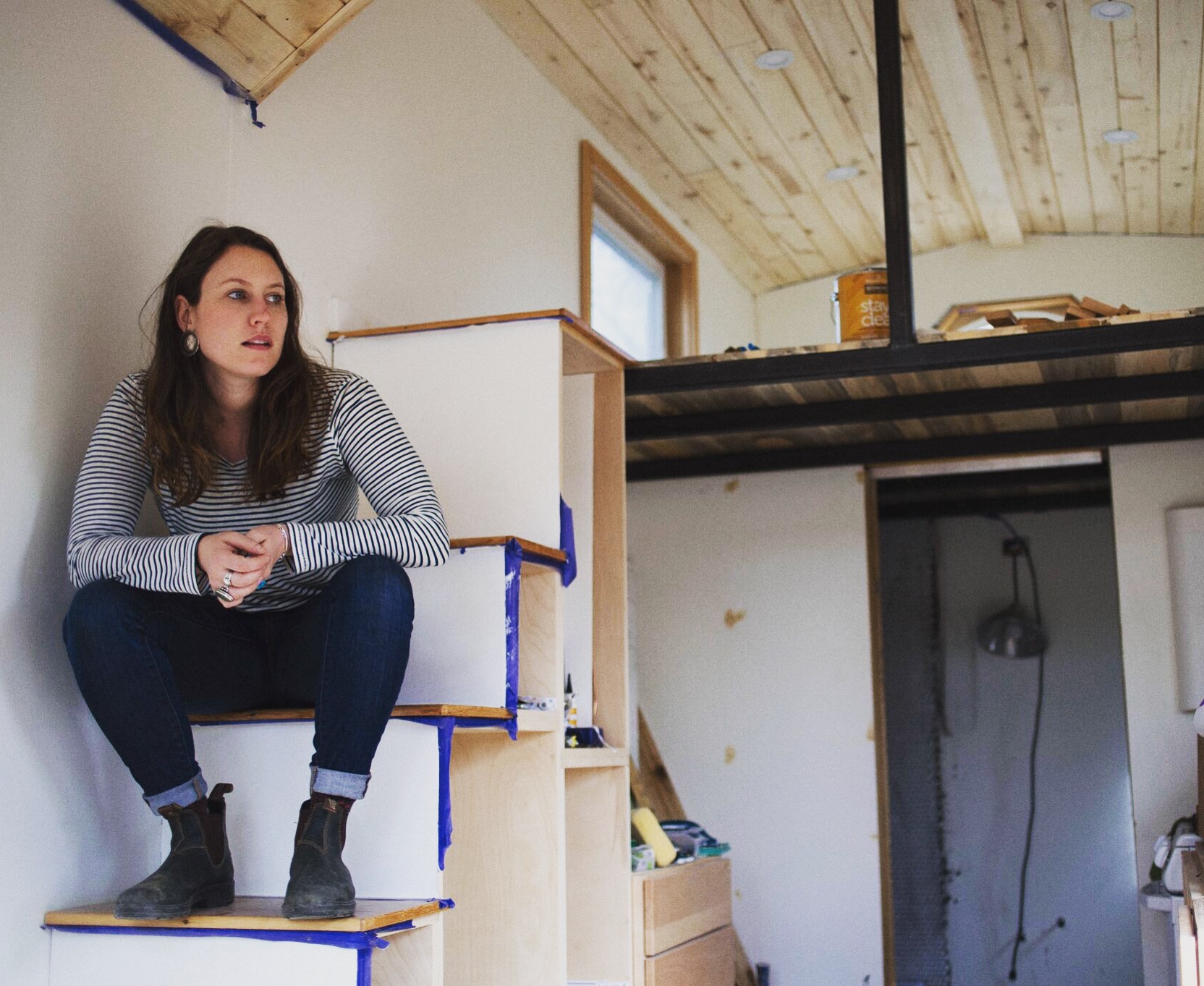 I was ready to live alone, get a dog, and put energy into building something with my own hands. However, financially, I wasn’t ready to buy a house and I didn’t know where in the United States I wanted to live. I had imagined this step happening with a partner, but I had been following the Tiny House movement for several years after studying permaculture and natural building. The idea of building one myself began to feel so compelling that I couldn’t think of anything else.

I dove into months of research and designing, knowing that with a firm foundation of knowledge I could do anything I wanted to. I was also in the fortunate position of being able to build in my parent’s backyard and live in their home rent-free. Otherwise, the build never would have taken place.

My parents began to come around to the idea after careful budgeting, designing, and ever-evolving material lists. My father actually got hooked on the project himself and we began to build my house together.

With a background in permaculture, I wanted to build a tiny house with as many high performance, green building materials, and reclaimed materials as possible. I thought about the life cycle of my home and where it would end up when it’s taken down in either 20, 50, or maybe even 100 years. Would it live in a landfill forever? Could the studs be steel and 100 percent recyclable and the insulation biodegradable? Absolutely.

As an amateur builder, I had moments of extreme doubt, of lacking motivation to build on the off-hours around my full-time job, but the vision was so magnetic that I pushed on. We pushed on.

I took full advantage of video tutorials, blogs, design ideas online, and anyone’s knowledgeable brain I could pick. There were so many do-overs, moments of frustration, arguments over how to do something, runs to the recycled building and hardware store, building parties, elbow grease, and take twos and threes.

Two and a half years later, we completed and certified “The Honey House” build and I moved with her and my dog, Luna Mae, across the country to a town I had visited for one day, and where I didn’t know a soul, or have a job. 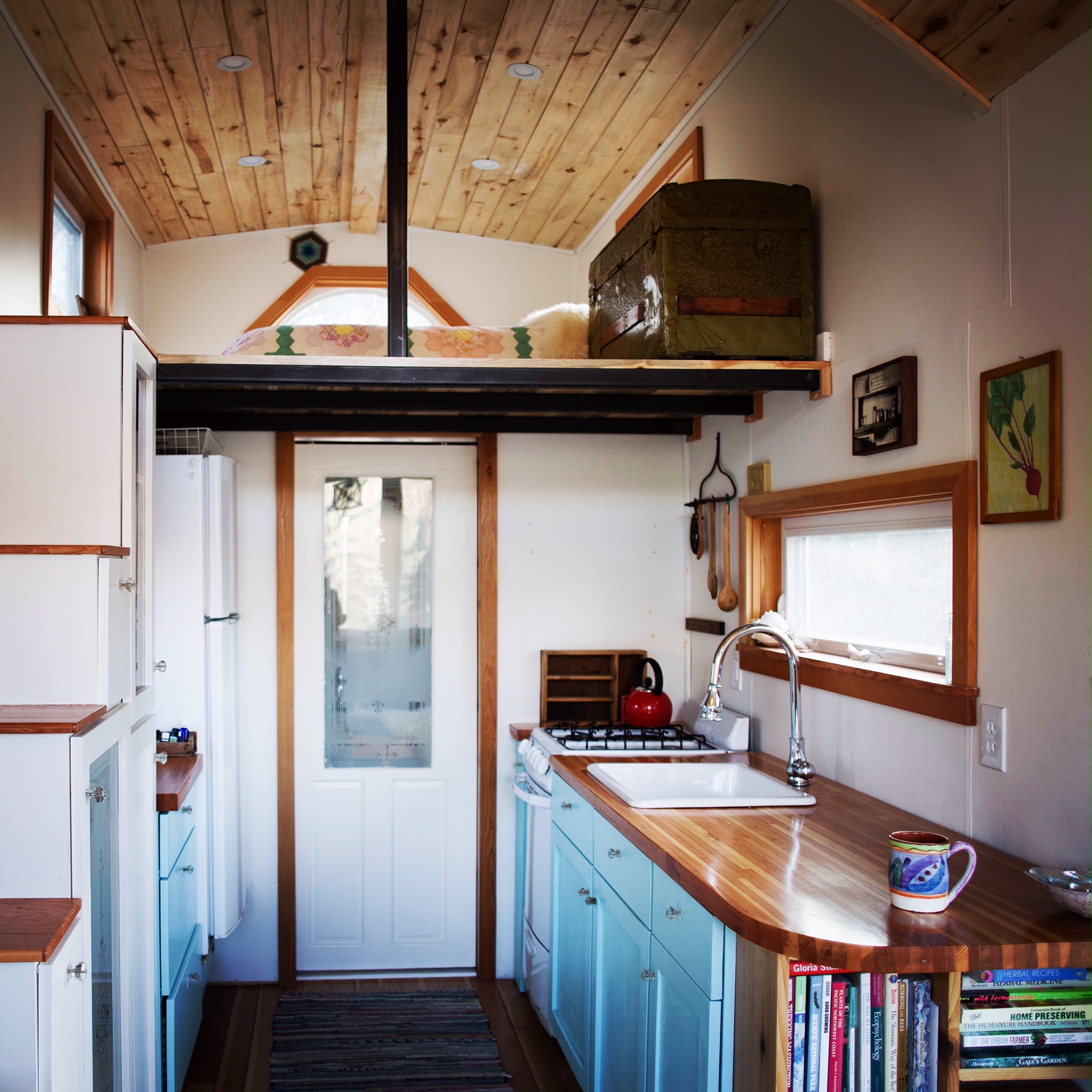 At the time, the forward momentum felt so right to make a major, life changing move away from a town I knew too well and a massive amount of social support I had grown so comfortable with. People in my life have described my choices as “bold” and I agree. Perhaps, I think sometimes, too bold when I find myself being reported to zoning departments in two different states and having to move.

Or, painfully lonely in my little house on a farm outside of town, with emotional summits and valleys, because of a life I chose to build for myself; however, this has become my calling.

Throughout the building process, it naturally became clear that I wanted to share all of the knowledge I had gained through research and hands-on experience. I wanted to encourage others to build in a more natural way while taking their health and the health of our earth into consideration, and by offering resources and natural green building materials for others looking to downsize.

I’ve almost paid off my house and lived tiny now for two years. I’ve lived in three locations, have had over 20 guests spend the night, four kittens born under the couch, numerous dinner parties, and lots of cozy times. I feel, in many ways, that my life has expanded. The simplicity of living small in a space built for myself and by myself and my father, feels sacred and perfect.

Even though I can see the imperfections of amateur building, they are a reflection of a beautiful process and have become the beauty marks of my home. Additionally, the positivity that comes with having less of an environmental impact is unlike anything I could have envisioned before living this way.

People choose the tiny house lifestyle for various reasons—economic freedom, the ability to move locations, simplify and reduce belongings, and as a way to reduce our environmental impact by making a strong personal choice to live with less and in less space. For many, living tiny has created a more community-oriented lifestyle that focuses on spending time in nature.

Personally, living tiny has made me painfully aware of the waste I produce, my water usage, and my consumption as a whole. I love that this shift has happened so effortlessly by living in a smaller space. Additionally, everything that I own is dear to me and right at my fingertips. Every belonging has a home.

I think that most people living tiny share these sentiments and although it’s still illegal to live in a tiny house full-time in most areas of the country, we push on to change the laws in our towns as a means to address the nationwide affordable housing crisis and reduce waste. As more municipalities change their laws to allow tiny homes as viable full-time residences, this movement is going to continue to grow, and with it a more conscious way of living.

I long for a future where I no longer will have to live as an outlaw in my home. But for now, it’s exquisitely my own and just right. 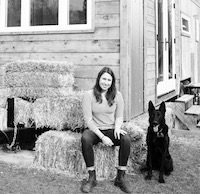 Letting go: A little guide to begin Tiny Living & Decluttering. What Makes a Good Home? {Tiny House Film Alert} How the Tiny House Movement turned me Into a Hater.