A Letter from a White Woman to her Unborn Black Child.

The events in America this week have been nothing short of heartbreaking.

Anyone without a stone heart will have been touched in some way by the senseless, needless murder of yet another black man.

We know what we have seen; the footage is everywhere. A white police officer held his knee on a black man’s neck until he died.

Facts can be disputed, but we know that if the police officer had not held his knee on George Floyd’s neck, he would still be breathing today.

Witnessing his death is a stark impression left in our brains—an impression not only of how George Floyd died, but how all of those black men and women died before him at the hands of white racists.

None of these people should have died.

Again. None of those people should have died.

No mother should see their child on this death list. No mother of white children will.

While I am still some way off of having children, I look forward to the day I welcome them with my partner—a kind, funny, generous, gorgeous black man.

I dream of cradling my black child while I sit on the beach in the sun, and of holding him in the water for the first time. I dream of him running with his cousins in the fields under the blue sky, and learning that he came from two cultures both rich in Earth’s history.

But today, instead of dreaming, I wrote my future son a letter.

I wrote him words from my heart, because there is nothing out there in the world right now that will protect him from the violent racism that kills black people.

I wrote to him that he is named after a king for the king he will become.

I wrote to him that he is my gorgeous, perfect boy, and that I pray that all the summers of his life are blessed.

I wrote to him that I pray this world will hold him in the grace and dignity his skin deserves—that when he is born, we treat black people better than we do now.

I wrote to him that he deserves a long and happy life, free from violence and hate. I tell him I will always—in strength, love, and patience—be his mama. A mama who prays that she will be able to guide him through this racist world, and that I pray I will never know the fear every black mother in America knows right now.

I tell him I am terrified.

As a white woman, I am acutely aware of the safety and privilege my white upbringing has afforded me.

I know no assumptions are made of me because of my skin colour.

I am aware of the way white people write off these murderous atrocities as deserved because of their black skin.

Too often, I have heard white people assume black people must have engaged in criminal acts to deserve the brutality that was enforced on them.

Enough. We must hold ourselves accountable.

I don’t want to see this anymore. I don’t want to cry tears for the people who are killed, or feel pain for what their mothers and fathers and sisters and brothers will go through when they are murdered.

I don’t want to have to convince my white friends that this is a problem we should face and do something about. I want this world to be better and to know this inherently. 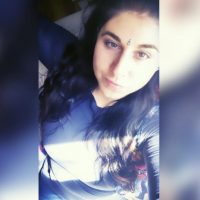 Charlotte Wakefield is an Island dwelling traveller with the heart of a gypsy. Writer of words and opinions always with good intention. Over emotional wild child who just calm… Read full bio

Resources for Well-Intentioned folks who want to Educate themselves about Racism. If you Know you aren’t Racist, watch this Blue-Eyed, Brown-Eyed Test. What White People Can Do, because Black Lives Matter. #BlackLivesMatter Wouldn’t be Necessary if All Lives truly Mattered.
See relevant Elephant Video