How I went from a 6-Figure Income to being “Broke,” Happy & Free.

A post shared by Karen Matamoros (@karenmatamoros_momonajourney) on Aug 20, 2019 at 4:26am PDT

I just wanted to cry.

My soul felt so heavy. Not from sadness or happiness, but from many years of pent up emotion.

It was as if my emotions finally had the okay to unleash their cooped-up fury on every part of my being.

I had just walked out of my brick-and-mortar for the last time.

I had been creating six figures worth of product, mostly alone. I would wake up between 2 and 4 in the morning, sitting up in my bed ever so slowly to keep my nausea at bay. I would slip on my soft and stretchy work pants so as not to disturb the swelling that came from the lack of sleep and poor eating patterns. I would brush my teeth, pull my hair back and, barely looking in the mirror, I would head to work.

The air was always thick; the streets where always empty and quiet, and my head was in a constant fog as I repeated my daily morning pattern day after day.

Yet this was my favorite part of the day—the quiet moments before the phone would start ringing with anxious customers attempting to place the perfect order for their perfect day, before I would have to joyfully greet people who were not deserving of the best I had to offer. The quiet moments before the minutes would sieve through my fingers (as the sands of time tend to do) and leave me staring down deadlines. The moments before my days rolled into one another, ending sometimes in 36-hour shifts.

When my experiment first started, I didn’t stop to feel the weight of everything that was spilling out of me. I didn’t know how.

My dial had been set to go for so many years; stopping was not something I could fathom. But stopping is exactly what I knew I had to do. The search for freedom had nudged me forward; the universe cleared a path. I gave myself 30 days.

It was at the beginning of those 30 days that I attended a spiritual New Year’s retreat accompanied by my eldest daughter. During a day spent in silent meditation in the swampy woods of Gainesville, Florida, I contemplated the life that lay ahead—the life that was yet to come, and the possibilities that the universe would present me with.

That unsuspecting day, during personal time, I received a call from a friend hoping I would connect her with someone renting an apartment “like” mine. Time stopped as I considered what was being presented. Without hesitation I muttered, “Why not mine?” It felt destined to be. It felt like saying yes to the universe. It felt scary and freeing, and crazy and…perfect.

As we returned home, I took every free moment between long workdays to clear out my apartment, as I only had a few days before my friend would need to move in. I would crash on my ex-husband’s couch until the universe gave me the word.

And the next day, without falter, while chatting on social media with a newly acquired friend from Macedonia, the universe cleared the path again.

This new friendship had developed from a serendipitous encounter on a red-eye flight a few months prior. While sitting next to each other on the tight and uncomfortable single’s row, this respectfully charming older man told me about his life for hours (and repeatedly complained about his discomfort while, at the same time, being concerned for mine). By the end of the flight, I’d come to feel a deep, old-soul connection. We exchanged numbers, as he was concerned about me arriving safely to my destination at such late hours.

It had been a fortuitous encounter; I had been able to enjoy humanity for its simple cordiality.

But we were to be reconnected by a common need: he had a place that would be empty and needed to be cared for, and I needed a place to stay as my daughters and I set off on a journey of discovery led by freedom.

And so, that final moment came.

As my existence as an owner of a brick-and-mortar ended to make way for a new experience, there was no stop in sight. It was only days later that we hopped on a plane to this gentleman’s apartment to start our experiment.

I had long blamed work and money for my lack of freedom, so the premise of my experiment was to see if we could live an extraordinary life without money, or at least, very little of it. Bartering seemed like a logical step in this experiment, and this apartment fit the bill.

It was in that charming mid-century modern apartment just outside of New York City that our experimental life began, enveloped by a bachelor’s red, white, and black color scheme. It would be the place my girls experienced their first snow fall, the place they walked for the first time in snow boots, rode on a crowded train, got midnight chills from an open window as a winter storm blew in, and experienced cultural differences when interacting with the world.

I had seceded all control to the universe and said “yes” every time a new path was given. And thus, the experiment had begun. It proceeded for two good years with no end in sight. 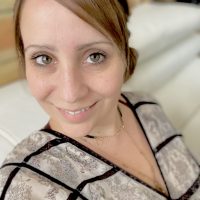 Karen Matamoros is an alternative education coach and founder of Project: KAring, who decided to homeschool her daughters after a couple of years in the system, taking them on… Read full bio

Discover Your Ikigai—(Your Reason For Living). How I Manifest like a Badass. I Quit my Job & Moved to the Caribbean at Age 40. How to (Seriously) Manifest the Impossible.
See relevant Elephant Video