Why I Boycott Yoga Journal (& think you should too).

Editor’s note: We go way back with Yoga Journal. They were the big sister to our little Elephant grassroots messy publication. We’ve had issues with them over the years, and friendships, too. The purchase by AIM really changed things—which staff, past and present, would be the first to admit. YJ has effed up, at times, as mentioned below. We hope they’ll improve, and somehow get independent of AIM, which seems to be starving their resources to make those changes. ~ Waylon

I clearly remember the day in 2007 when I decided to stop buying Yoga Journal.

I was a budding, new yoga teacher—only three years in—and I had a ritual that I looked forward to every month.

I would go to a magazine store and buy all the new yoga magazines. Then, I would take myself to my favourite sushi restaurant for lunch.

While I waited for my udon soup and veggie tempura to arrive, I would flip through the yoga magazines and fold over the page corners of articles I wanted to read later.

On this particular day, I went through my copy of Yoga Journal and started the folding process.

As I got to the end of the magazine, I realized that I had only folded over two articles.

That can’t be right…

…I thought to myself. So, I flipped through it again to catch the ones I had missed, except there weren’t any. Out of that whole issue, there were only two articles I wanted to read: a meditation article by Sally Kempton and one asana article.

I was shocked. It wasn’t a small issue, just as thick as the previous ones. And I certainly didn’t know so much that I no longer needed the resources. The other yoga magazines I bought had plenty of pages folded over, so what was going on?

As I flipped through the articles, I started to notice a common theme: ads. And lots of them.

There were so many ads!

There were straight-up obvious ads, and ones that were more cleverly hidden and looked like articles but were sponsored posts, or curated product ’rounds-ups’ of the latest yoga pants or water bottles.

I started to feel pretty uncomfortable and confused—what did any of these things have to do with yoga?

As I dug even deeper (and started a tally), the articles were drowning in a sea of ads for weight loss, detox supplements, and expensive yoga pants designed to fit only thin (and well-off) women.

Was it possible that Yoga Journal had always been this way and I just hadn’t noticed before?

I went home and started looking through some of my older issues. Some issues I had bought before I became a yoga teacher and some were vintage issues that I picked up from a free box at a local studio after someone cleared out their collection

And as I went through these older issues, my heart sank.

It wasn’t me that changed. Yoga Journal had.

Throughout my years in yoga activist circles, I heard rumblings about how out of touch Yoga Journal was with the community it served. About how Yoga Journal had essentially zero representation for anyone who wasn’t young, white, female, straight, flexible, able-bodied, and wealthy enough to afford spending hundreds if not thousands of dollars on yoga clothing, props, retreats.

Hell, even one of the founders of Yoga Journal, Judith Hanson Lasater, who is also a long-time contributor, had expressed her discomfort with the path the publication was taking in a letter to the editor.

Among these concerns and complaints, I have also often heard yogi activists say,“yeah, but Yoga Journal has always been that way,” often followed by an eye roll or a hurumph.

Except, that’s not actually true. Yoga Journal has not always worn the classist, materialistic, racist, heteronormative veil that it does now…and I have vintage issues to prove it.

Yoga Journal was founded in 1975 by the California Yoga Teachers Association. It was a grassroots, community newsletter and a way to share information, articles, and connect with teachers. Back then, yoga was not the mainstream activity it is today. It was still a rather counter-culture thing to do and aside from a handful of yoga books, it was difficult to find articles and updates about it. At the time, the intention of Yoga Journal was to share resources with teachers, and to give teachers a space to share and educate students.

The publication was so indie that initially, it was staffed by volunteers and contributors who were unpaid.

In 1984, Judith Hanson Lasater made a public plea at a yoga conference for people to subscribe and donate to keep Yoga Journal afloat. The community responded and Yoga Journal forged ahead.

Over time, as yoga grew in popularity, it became clear to the original founders that they were going to have to fish or cut bait—a crossroads to either expand or die off. So in the fall of 1998, John Abbott, a former investment banker and yoga practitioner, bought the publication.

Then, in 2006, the magazine was bought by Active Interest Media…and this is the Yoga Journal we see today.

And while we would think that over time a yoga magazine would become more diverse and inclusive as yoga’s popularity grows, sadly the opposite has been true.

These images are a great visual summary of how Yoga Journal has changed over the years: 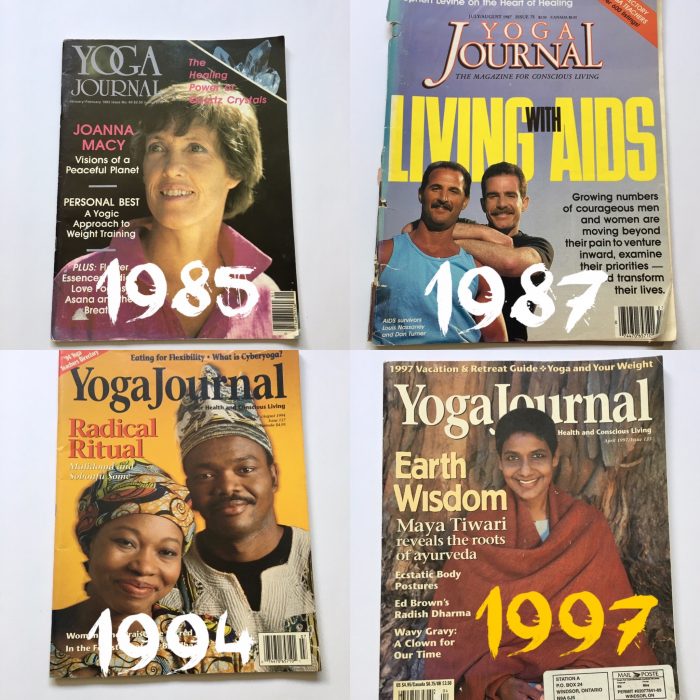 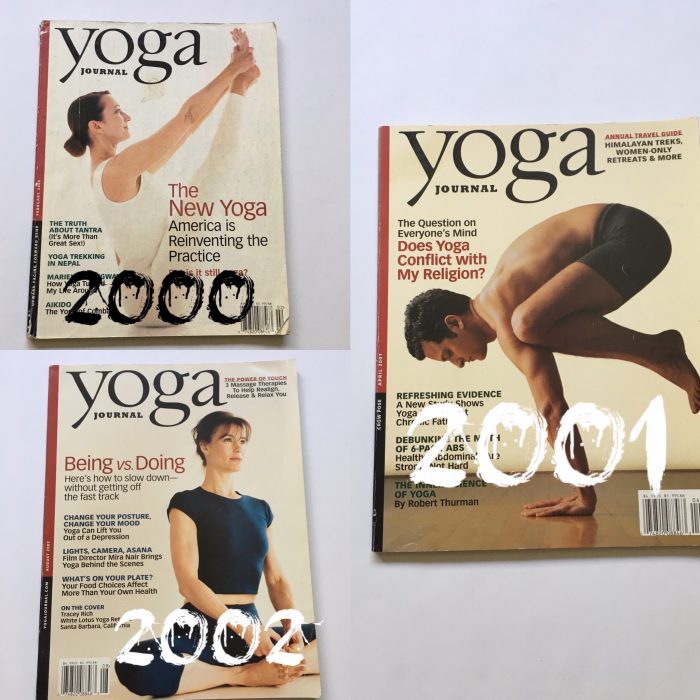 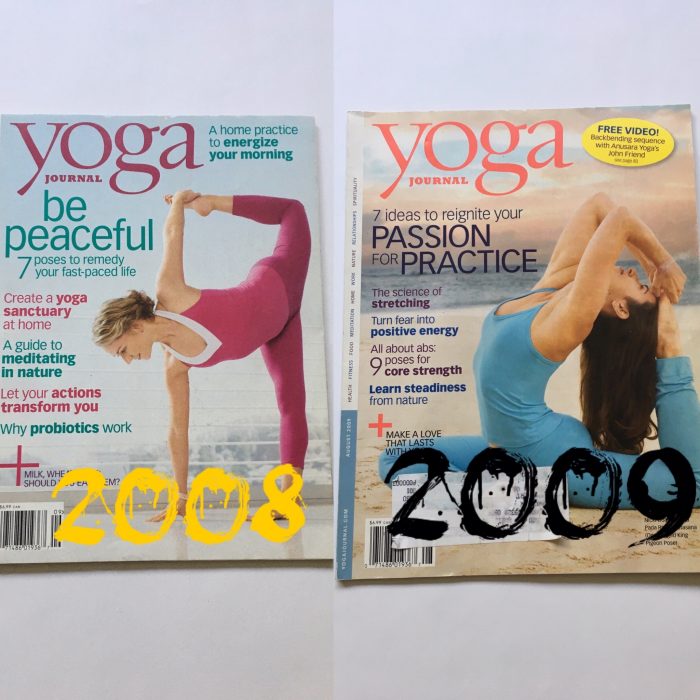 It’s not like people haven’t tried to help Yoga Journal. It has participated in panel discussions, called in and called out—but nothing changes. The publication has made mistakes that are so oblivious and ignorant that when it does finally put Black women in the foreground, it reeks of tokenism.

So, I decided to boycott Yoga Journal that day all those years ago and haven’t bought an issue since, nor will I in the future.

I think it’s time we see Yoga Journal for what it is: a mainstream magazine in a capitalist society that sells us the same messages as fashion and fitness magazines.

There is not much that’s yogic about that.

But guess what? We vote with our dollars every day! Yup, it’s true. Every time we spend money, we say, “I support this” or “I value this.”

As individuals, our small investments can make a difference. As a collective, we can be powerful agents for change.

So are you ready to boycott and stop supporting Yoga Journal? If so, then welcome to the evolution. And once you have, please share this message with your yogi friends far and wide. 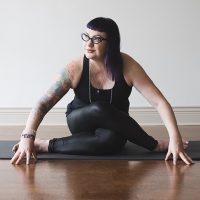 Yoga: How White People can Respect what was Never Theirs to Begin With. Santosha & White Privilege: Why we shouldn’t be Silent about Unintentional Racism. Throw Away the Damn Scale—Thoughts on Body Image from an Ex-Skinny Girl. Judith Hanson Lasater Slams Yoga Journal for “Sexy Ads.” ~ via it’s all yoga, baby
See relevant Elephant Video