Maitri: It’s having Coffee with the Grief that Hollows out your Heart.

I’m easing into the idea of maitri by sharing my coffee with a wounded ballerina. She looks surprised. Maybe it’s because I usually ignore her, or it could be the expression created by her unnaturally arched eyebrows. I pause to read the stamps that mark her: Noritake, 1990, G. Armani.

Next to that, there’s something illegible and a small, ornate stamp deeply grooved in the ceramic base. I haven’t really looked at this statue for a long time, even though I walk by it daily. I was invited to sit with my feelings as a self-care mindfulness practice. So far, I’m not enjoying this Maitri date.

I’m determined to give it a try and sit here for just one coffee, but the cup feels bottomless, and I can’t drink it quickly enough. My gaze moves over the edges of her bodice, and I sense sadness lurking between us, challenging our poised facades.

This static friend holds a wave of grief that once threatened to hollow me out. At 18, when I received her, I barely sensed my own life. I wasn’t equipped to process the loss of my cousin’s life. I remember not being able to breathe, let alone function at school. It’s difficult to spend time with the memories of that loss, even now, over two decades later. 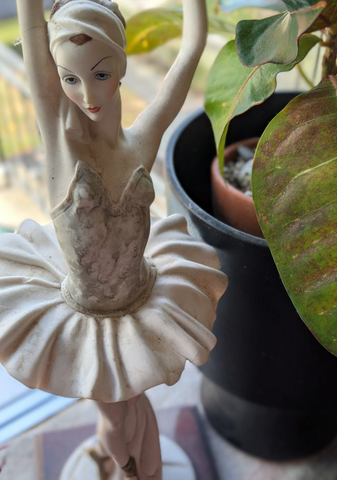 I move my attention a little closer to the hurt. It makes me think of a dear friend who recently lost a parent. She gets it. I wonder if the inner strength that maitri teachers speak of will ever come. None of this feels like loving-kindness. Still, I understand that grief brings up resistance and is a struggle for most people, so I give myself a pass.

The ballerina is elegantly poised with arms raised over her head, and fingers bent inward. They create the shape of a circle, but it should be a halo. She’s endured so much. Like me, she’s good at appearing as something she’s not. When you look closely, beneath the layer of dust, she’s deeply fractured. Everywhere. There are lines running through her legs, the tulle of her dress, her thin arms, her face; nothing is whole. I’m afraid to touch her. She’s barely held together by Krazy Glue and fear. The sun has baked fragility into places that once were not so yellowed. Some pieces are missing. There’s a chip on her dress that’s bridged by something wispy, possibly a spiderweb. I don’t dare clean it.

Twelve years ago, while renovating the house, a gust of wind crashed her to the ground. My husband’s guilt and patience saved her when I had given her up. I don’t know how he managed to (painstakingly) piece her back together like reverse Jenga.

She was 16 when she died—Selina, my sister from another mother. It didn’t help that everyone told me she looked so much like me. We joked about it too:

Selina gave me the ballerina statue as a gift for confirming her. It was a surprise when Selina picked me to be her symbolic spiritual guide, given that we were only two years apart.

Now I have her to be mine. Memories of the funeral flash through my mind invasively. Seeing her lying in stillness, snuffed out, empty. Half of her face was covered because the accident damaged her too badly. Half of my face lacked its mirror. I approached her casket, playing a strange movie in my head with a different ending.

I imagined grabbing her, raising her with so much love that it would lift her out of death. She’d open her eyes and take a sharp breath like someone grasping air after being kept underwater too long. I’d hold her and carry her to her mom. Surely her mom would know how to comfort her and love her in a way that would make things right again. The countless, drama-fueling faces crowding the room made her casket feel encaged. I hated every single one of those people.

I remember one night when my cousins came to visit. We were all dancing to The Cult’s “She Sells Sanctuary,” singing “The world. Oh, the world turns around” while spinning with our arms out. Selina had this saying, “You’re a cool kid,” looping through the night. She said it a lot and used it as if it was a period at the end of a sentence.

As it turns out, I was struggling with depression that started at the age of 12 and only began to lift in my 30s after much therapy. It’s what drew me to help others in my career.

Tears stream my cheeks, remembering the lightness of that moment dancing like cool kids. I’ve dreamt of her often since then, and I’m always aware that these dreams are visitations. They are happy, easy visits. Once, we were at an ice cream shop, and another time I dreamt of giving her a piggyback ride on the beach.

I always wake up sad after seeing her. It makes sense, though. Selina deserves being deeply missed and grieved.

I catch myself smiling, grateful for the resiliency that brought me to this moment. I sigh and sip the last of my coffee.

It feels good to share my sadness with an old friend. 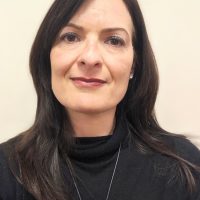