How my Dog told us He was Ready for the Rainbow Bridge (& how to Find Him Again). 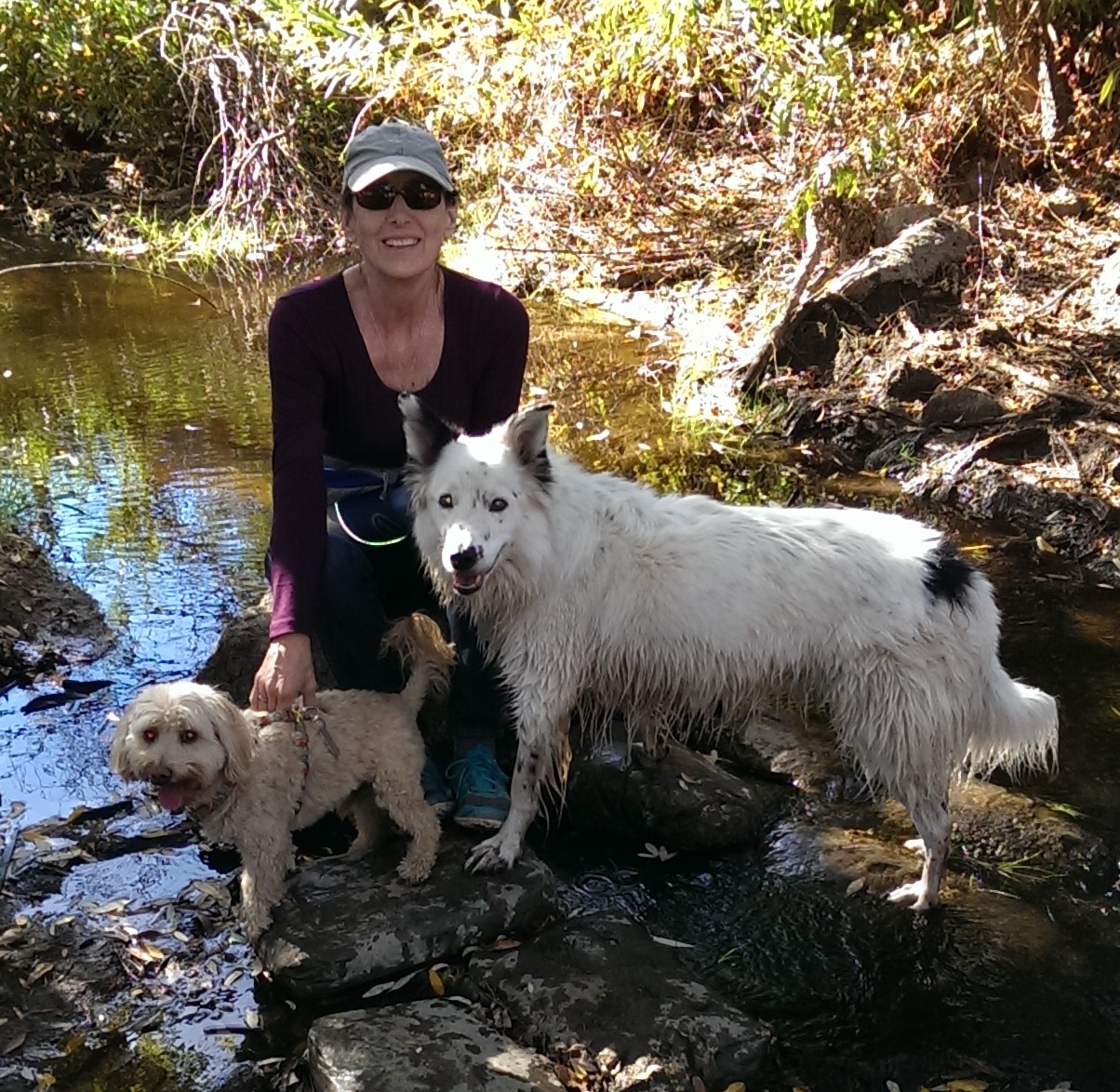 I remember the day he came to us.

We drove out to Adelanto to a sheep farm to pick him up. He was different than your typical border collie. Rather than the common black collie with white markings, he was predominately white with one black ear, some black freckles on his nose, and a black ring around the base of his tail. The breeders named him Ringo.

We were novice border collie buyers. We didn’t know the difference between a dog who came from working stock and a dog bred to be a companion. Ringo was bred to be a working dog. Put that together with the legendary border collie intelligence, and you have a combustible engine. Our new dog wasn’t a peppy little Honda Accord, Ringo was a Ferrari.

We first witnessed his innate instincts at work when he was just four months old. We were on a hike with Ringo and our westhighland terrier. They were about the same height, with Westy outweighing Ringo by about five pounds. Walking on Westy’s right side, Ringo moved in tightly and shouldered her firmly to move her to the left, then he circled around to her left, shouldered her to move her to the right. He did this a few times then ran out in front of her, crouched down, and gave her “the border collie hard eye” meant to intimidate sheep and bring them under the BC spell. He was clearly herding her.

With every bit of height and weight he grew into, Ringo became stronger, more agile, and more eager to work. We had a myriad of activities to engage him in. We took him mountain biking and hiking. He would run alongside us, then divert his run into the canyon, his big white body flying over the hills making a breathtaking figure against the green brush. He chased coyotes, found creeks to swim in, squirrels to tree, and rabbits to run. These outings always tired us out, but never Ringo.

We played endless games of frisbee or fetch in our back yard. He never tired. Border Collies can be obsessive. We would have to hide the frisbee or ball and sit on our hands to communicate clearly to him—game over.

There are times when we just wanted to chill, watch a little Netflix, drink a glass of wine. Hard to do with Ringo. Remember, he is a herder—a protector of his flock and, of course, we were his flock. He barked at anything on the TV that he deemed a threat. Any animal, even the cartoon animals, got barked at. Anyone who showed aggressiveness got barked at. We had to carefully select what we watched. No Animal Planet. No Nat Geo. Nothing with violence.

Ringo loved TV. He was entertained by it and somehow saw it as his job to watch it. He would sit in front of the TV and bark for us to come turn it on and watch with him. His favorite things to watch were dance or music shows. “The Voice” & “So You Think You Can Dance” were two of his favorites.

When Ringo was about five, we enrolled him in agility classes to give him more of a challenge. He excelled at running the courses, climbing the ladders, jumping the hurdles, weaving through the poles. He was so good, our instructors encouraged us to enter competitions, but Ringo was his own man and this didn’t go so well. If he saw a frisbee game happening outside the agility course, he might jump the fence to go catch the frisbee. If he thought another dog was getting a little too close to his herd, he’d ignore the competition to chase the dog away.

Our Ferrari was a bit of a loose cannon, but we loved him passionately. We called him our “special needs boy” because of all his quirkiness and the many accommodations we made for his strange behaviors. My husband often joked that we should have named him “handful.”

Fast forward 11 years and Ringo began to slow down. He still loved TV, walks, and ball chasing, but because of his size and his lifetime of athleticism, the joints in his legs became problematic and he began having trouble getting up and down. At 12, he was becoming a senior citizen and the difficulty with his mobility worsened. He became progressively incontinent and sometimes had a faraway look in his eyes, yet our magnificent boy’s spirit was as strong and vital as ever.

In his 13th year, something miraculous happened. We consulted a pet communicator so that we could talk with Ringo to see if he could help guide us with his end-of-life care. This woman, Amanda, has an extraordinary gift for talking with animals and what we learned blew us away.

Ringo described himself to Amanda as strong, loyal, athletic, and beautiful, but now, sadly, only a shadow of who he used to be. He told her, in detail, stories of his life of mountain biking, hiking, agility.

He told her how he loved TV, and why he loved TV. He said he barked for the TV because it was his way of calling the family together. When we were all in the TV room, watching something together, he could experience the energetic feeling of his old athletic days and for him, there was nothing better.

He told her so many things she would have had no way of knowing, but we knew intimately, about the span of Ringo’s life with us. He spoke of the experiences we’d had as a family and the deep and lasting love we held for one another. He referred to us as his soul family and assured us that we would always be connected. There was no denying that this was “the real deal.”

Ringo let us know that he needed help in making his transition. His heart and mind were still so strong, but his body had completely given out. He was tired and no longer wanted to live this way. We followed his guidance and, with the help of a wonderful vet who came to our home, euthanized our sweet boy as we stroked his head and whispered our love into his ear.

We talked with Ringo about a month after he’d made his transition to spirit. Again, we were amazed at the intimate details Amanda knew about our last weeks together, and the day of his transition. Our boy had shed the weight of his failing body and was now light, joyful, and anxious to come back and inhabit a body again. He is clear that he wants to come back to our family as a brand new border collie puppy. He has assured us that he will come back a smaller, less intense version of himself. He will guide us to the right place, at the right time to find him. He says it will be springtime. He tells us that we will have no doubt it is him.

And so, in the spring of next year, this whole wonderful adventure will begin again. Our boy is coming home from the rainbow bridge and I can hardly wait!

5 Things your Dog wants you to Remember during the Covid-19 Pandemic. “All of you breeders/sellers should be made to work in the ‘back’ of an animal shelter for just one day.” [Warning: real] R.I.P. Ramona: how Killing a Dog harms our Human Community. How to find the Right Dog, Cat, Puppy, Kitten, Parrot or Hamster for You.
See relevant Elephant Video

How the Buddhist Notion of Impermanence can Save our Romantic Relationships.