Who is “Borat” creator Sacha Baron Cohen & What is behind all this Noise? 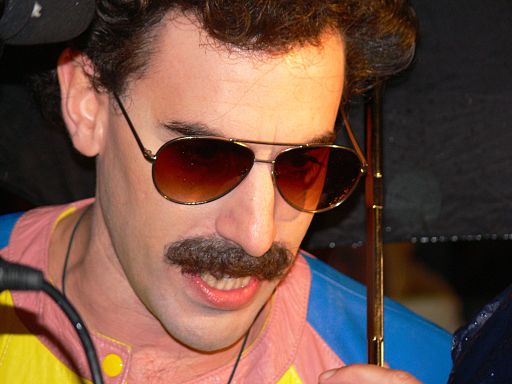 Most of us know him as the weird guy in a yellow mankini who loves to push people’s buttons.

But there is more to Sacha Baron Cohen. He is more than just a crazy clown.

Since the beginning of his career, he has always been hiding behind alter egos created by him. “Ali G,” Brüno,” Admiral General Aladeen,” and, of course, “Borat” are roles Cohen is using to get his message across.

Before being a comedian, he studied history with a focus on anti-Semitism. He wrote his dissertation on the American civil rights movement. But why does such a serious person put on a costume to provoke others?

In 2019 Cohen received the Anti-Defamation League leadership award for his activism against racism, sexism, and anti-Semitism. At the award ceremony, he used his time to deliver a breathtaking speech about the role of social media in today’s extremism.

The board of the organization honored him for his outstanding performances in various roles that shine a light on society’s ignorance and biases. They acknowledged that Cohen’s well-planned provocations were part of a strategy to use humor to create awareness toward the blind-spots of modern society.

Cohen used his acceptance speech to accuse Facebook and other tech-giants of enabling the spreading of hate, and even worse, basing their business model on fear, lies, and conspiracies. In his passionate speech, he points out that this conversation is not about limiting freedom of speech, but about stopping social media’s divisive nature.

Just a few days before the 2020 election, he released his latest project, “Borat Subsequent Moviefilm.” Once again, he uses his unique style of inviting people to expose themselves. Cohen’s various alter egos continuously drop more than controversial claims to set the space for others to take off their masks.

Affirmatively, he tricks average folks and public figures like Rudy Giuliani into embarrassing themselves. In Giuliani’s case, he teamed up with actress Maria Bakalova to fake an interview with one of Trump’s favorite lawyers.

Cohen’s movie makes us cringe when we hear human beings saying horrible things, see public figures acting in sketchy ways, and watch the main character creating absurd situations in public. At the same time, we have to keep in mind that most of it is not scripted.

These situations unfold as they do. We might not like the fact that Cohen finds and films these individuals, but we have to admit that most of us know people with similar tendencies and beliefs.

Cohen listens to guys reciting crazy conspiracy theories, sings anti-Obama songs to a delighted Trump crowd, and does everything possible to get people on camera exposing themselves.

But that is the key aspect of it: exposing themselves.

He does not force anyone to spit out hate. Of course, he is slightly provoking these people to do these things, but he certainly did not make them think that way.

As he brilliantly put it in his acceptance speech at the award ceremony of the Anti-Defamation League, that was someone else. Cohen holds social media responsible for the spread of conspiracies that drive people toward hatred and misinformation.

Cohen might look like a provocative clown at first sight, but there is much more to it.

Instead of using his degree in history to write academic literature, he tries to use his knowledge about racism, sexism, and anti-Semitism to stir up the public conversation.

He might not be as attractive as Russell Brand or soft-spoken as Jimmy Fallon, but we should take him just as serious, if not more, than these other two.

We should not judge him by the discomfort he creates by holding up a massive mirror to society. Instead, we could explore the work of Cohen as an inspiration for our own activism.

There is a lot of racism hidden underneath the surface of everyday situations that we tend to ignore for the sake of inner peace. Throughout the last four years, we have painfully experienced that all of this hatred can’t be ignored any longer—unless we want more of it.

The Trump presidency has taught us that it is not that one crazy uncle supporting right-wing ideas. There are conspiracy networks regularly reaching millions of people. Even worse, there are people we love and respect who also run danger to fall for fear, lies, and conspiracies.

Sacha Baron Cohen might be loud and discomforting at times, but he only exposes already existing problem that we all need to deal with.

No matter how this election ends, we have to stay in the debate. We can not afford to look the other way anymore. Trump and his supporters showed us what happens when we lean back and take a functioning democracy for granted.

It might not always be fun, but as Cohen shows us: It could.

And whatever you do,