Who is Kayleigh McEnany & What do We need to Know about her Supporters? 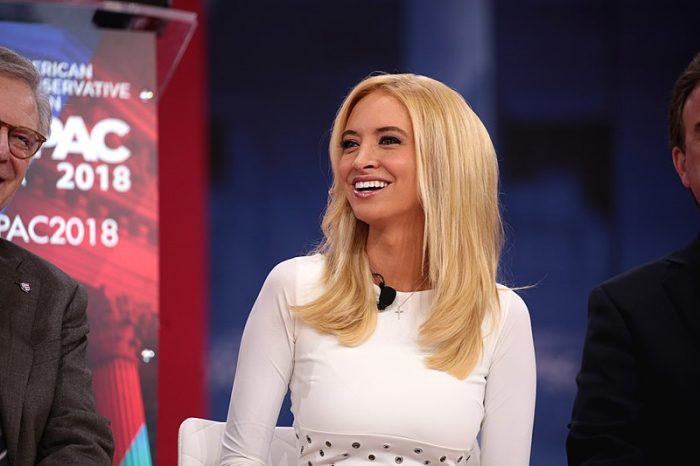 Last week I wrote an article about Candace Owens and exposed her background.

I received a lot of support but was also the target of countless insults, which did not surprise me at all. I am okay with that. As I said in my last article, I want to clarify that everyone is free to express their opinion.

What I care about are the motivations of activists who claim to be defending the United States against a “socialist threat.”

Let’s have a look at “Turning Point USA” (TPUSA).

First of all, we should take a look at their mission statement:

“TPUSA’s mission is to identify, educate, train, and organize students to promote the principles of fiscal responsibility, free markets, and limited government.”

The next step is looking at the people running this organization:

Charlie Kirk is the founder of TPUSA. In 2012 he met Foster Friess and persuaded him into financing his project. After that, many other big-money donors like Betsy Devos hopped onto the train and supported TPUSA.

Besides Kirk, many other well-known characters support TPUSA. Candace Owens used to be part of the organization until leaving in 2019, but another member caught my attention: White House Press Secretary Kayleigh McEnany.

She is listed on the official website of TPUSA as one of their activists.

Before she got the job at the White House, McEnany stated a few things worth mentioning:

>> In 2012, she was one of the first tweeting claims that Obama wasn’t born in the United States and asked for his birth certificate.

>> In 2017, she wrote an article for The Hill, stating that “political correctness causes Islamic terrorism in Europe.”

>> In 2018, she published a book called The New American Revolution: The Making of a Populist Movement with the support of Sean Hannity.

>> She established herself as the conservative voice on CNN and then hosted a “real news” show on Trump’s Facebook page.

These statements probably got her the job at the White House. She is different than Candace Owens. Kayleigh McEnany has a degree in political science and law. She went to the best universities in the country—it would be far too simple to focus on her appearance (she is much more).

I have to admit, she is a beautiful woman, and she knows what she is doing. She is snapping at journalists and has “no regrets“ about the tear gas incident in front of the White House last week. Her job is to defend Donald Trump against the media, and she takes no prisoners while doing that.

Charlie Kirk, Candace Owens, and Kayleigh McEnany are part of a new generation fighting to protect “free markets.” One could also say that they are opportunistic and only care about their careers within the republican party, but that is up to you to decide.

Downplaying COVID-19, pushing conspiracies, and pretending to be a victim of political correctness is part of their strategy. They feel offended by criticism while slamming everyone who has different perspectives on campus or elsewhere. I want to remind them that freedom of speech is not a one-way street.

TPUSA also started a platform called “Professor Watchlist.” On that page, conservatives call out academics who seem to push liberal agendas on campus. At the same time, they were supporting people like Milo Yiannopoulos to hold rallies at universities all over the country. Do you remember that guy?

Everyone who dared to criticize Milo was accused of being homophobic. Does that ring a bell?

At Elephant Journal, we often talk about gaslighting when it comes to relationships. This is gaslighting in politics. Why is that?

If I go against Milo, people say I am homophobic. When I ask questions about Candace Owens, they call me a racist. If I say that Kayleigh McEnany’s past and current statements are troubling me, does that make me a sexist?

The answer is simple: no.

These young people can do whatever seems right for them to make a career in politics. If they choose to be the faces of the far-right movement, they are free to do so. But they will have to live with me and others calling them out.

At the same time, we have to be aware that the look of a person does not tell us anything about their motives. We should not judge them by their gender, race, or age. Instead, we can simply judge them by what they are saying, tweeting, and what they stand for.

The founder of TPUSA, Charlie Kirk, was the guy who came up with the idea to call COVID-19 the “China Virus” (which was re-tweeted by Donald Trump himself and made it mainstream).

As I said in the beginning, those people are free to do what they want to do, but we have to be aware of the systematic gaslighting that TPUSA is using as a strategy to push far-right agendas. If their donors vocalized these opinions themselves, the outcry would be incredibly loud, but this new generation of conservatives is helping to bring radical ideas into the mainstream.

They are the ones pushing conspiracies like the “birther movement,” the “COVID-19 Hoax,” or the danger of “socialists taking over the United States.”

TPUSA is actively agitating against “Black Lives Matter” while pushing the hashtag “All Lives Matter” on social media. Once their statements are spread all over the internet, Trump is echoing them and celebrates himself as a spokesperson for POC, young women, and students.

Next time we see a young person who is over-night famous and touts far-right talking points, we might want to ask ourselves:

The change we want to see starts with ourselves. Have you ever supported opinions because you were hoping that it helps your career?

Have you ever not posted something because you were afraid of how your boss would feel about it?

We have to speak up and stand firm against people trying to silence our voices. We should be respectful when arguing with others—nobody is ever convinced by insults. We must not focus on what someone looks like but on their content. We have to tolerate people with other opinions, but TPUSA will also have to accept that we will call them out on their obvious attempt to gaslight us.

Let’s respectfully do this and stay focused on the content, instead of the faces presenting it. Let’s be specific in our arguments and not allow insults to silence our voices.

Who is Candace Owens & What do We Need to Know about Her? I am Black. This is what I Need (& what I Don’t) from White Allies. I was Gaslighted (& it was the Best thing to Ever Happen to Me). Wake the F*ck Up, Karen—Breaking the Silence on White Privilege.
See relevant Elephant Video