The Dude with the Horns, his Mom & the Real Problem behind QAnon. 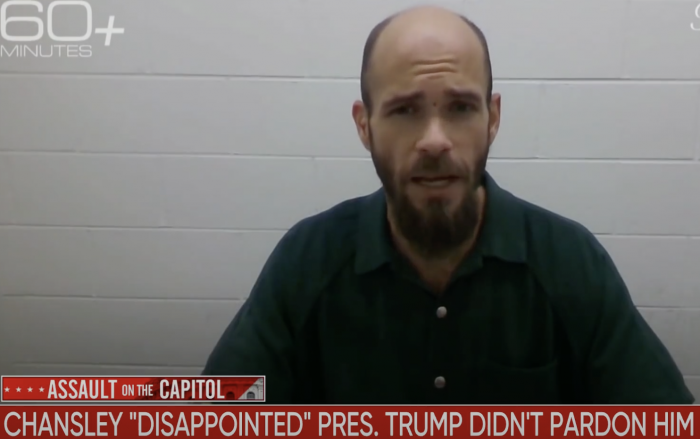 Two months ago, I wrote an article describing how Jakob Chansley, the so-called QAnon Shaman reminded me of my former friends in the wellness industry.

Some parts of Chansley got me thinking about the time when I was caught up in conspiracy theories as a young man.

And now, Chansley is back—well, actually, he is in jail, but he gave an interview on CBS.

A lot has happened since he got arrested. There were reports that he went on a hunger strike and demanded organic food—and believe it or not, he got his will. He was moved to a different jail facility that meets his shamanic standards.

In the meantime, his mother, Martha Chansley, also gave an interview.

Listening to both interviews, the one with Martha and the other with Jakob, fascinated and shocked me at the same time.

Both of them still believe the “Big Lie” and fantasize about stolen elections. Chansley still thinks that he did nothing wrong, while his mom supports her son’s defense “that he walked through open doors at the invitation of the sitting president.”

What shocked me even more was Chansley’s reasoning why he supported Donald Trump from the beginning:

“It seemed the media was picking on him. It seemed like the establishment was going after him unnecessarily or unfairly. I had been a victim of that all my life. Whether I’d be in school or at home.”

Of course, it is easy to make fun of a dude wearing horns and storming the Senate, but looking at what created a personality like that is actually pretty painful.

Martha Chansley still believes that she raised a good boy who was just doing something to “stop the steal.” The only thing Jakob Chansley is upset about is the fact that Donald Trump did not pardon him.

But this is not about two struggling characters; this is the heartbreaking story of mother and son being misled by conspiracy theories, right-wing agitators, and a lying president.

Chansley is the tip of the iceberg when it comes to self-entitled shamans who live at their mom’s place, but his mom is apparently also a textbook example of a supporting mother who defends her children at all cost.

He wanted to bring “divinity and God to the Senate” by singing a song and saying prayers—and he also stopped someone from stealing a muffin (he really mentioned that in the interview). She wanted to save the United States from a communist terror regime.

Both of them don’t seem as if they understand the gravity of their statements—they seem to have a pretty loose relationship with reality.

Instead of focusing on these two individuals, we might rather talk about mental health, broken families, and big-tech spreading fake-news.

Why did nobody intervene when Jakob Chansley was dancing on the rooftop of his mom’s house months ago? Why did nobody help Martha Chansley when Jakob’s dad left them? Why did Mark Zuckerberg not do anything against the rising popularity of QAnon when he had the chance?

It is always easy to bash less educated folks who act weird in public—but isn’t that a form of gaslighting? How would they know any better? They are obviously not the only people who fell for the lies spread on the internet.

If everything in my life would have gone down the drain, I could have been Chansley—and you know what, my mom would have probably also defended me at all cost. There are so many dudes with horns and supportive moms out there, and that is not the main problem here.

The biggest problem is that individuals get used as pawns by the entertainment industry to illustrate the ongoing mental health crisis. That doesn’t take away any of the guilt from Chansley—he will most probably go to jail for some time—but it shouldn’t be the end of this conversation.

Let’s hold the ones accountable who enabled this behavior:

I am looking at you Donald Trump, Steve Bannon, Roger Stone, Tucker Carlson, Alex Jones, Mark Zuckerberg, and everyone who shared QAnon content on their social media.

We can do better than bashing two individuals with mental health problems. We have to talk about the spread of fake-news and mental health. We have to make sure that something like January 6th never happens again.

And that starts with how we use the internet and continues with asking how social media could be regulated to protect its users from becoming the next dude with the horns.