The One Tool we can Rely on when Fear comes Calling. 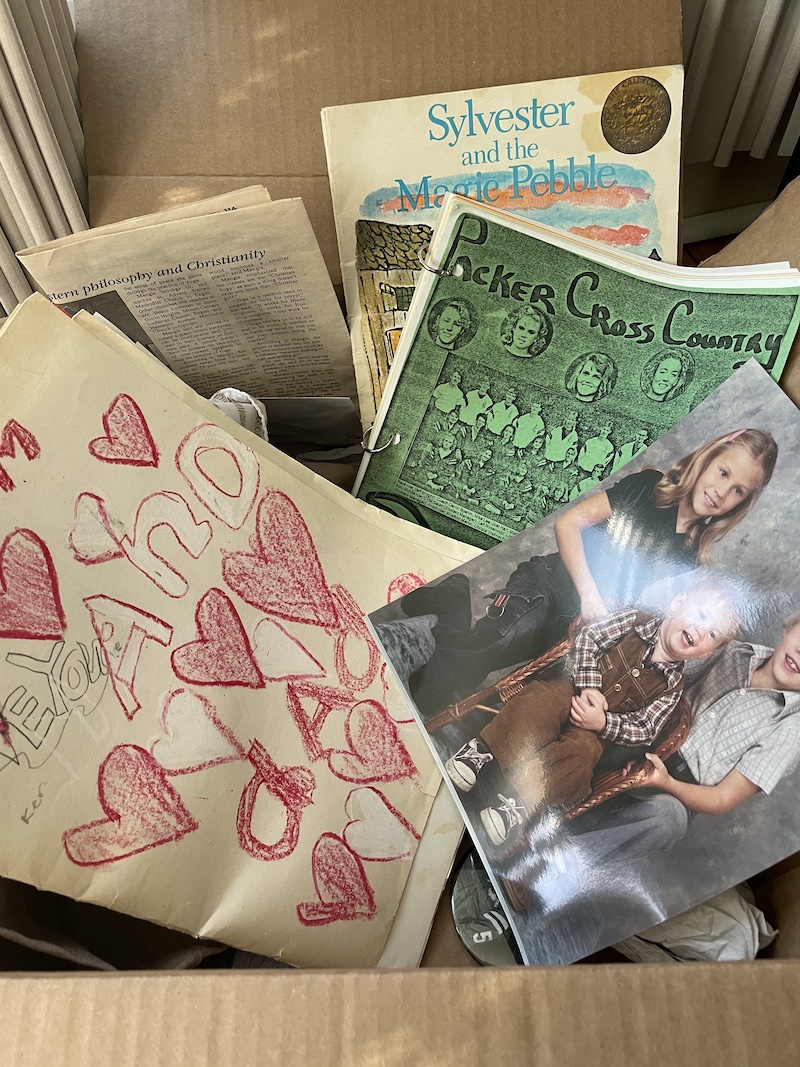 My mom called me on Christmas Day, asking if I’d opened her gift yet.

She sounded as excited as a child on Christmas morning.

“No, not yet, we’re going to have brunch first,” I told her, “and then settle down to open gifts around noon.”

I thought she was being a tad overemotional about the Instant Pot I’d asked her for. Until I opened up the box and realized what she had been waiting for: a box full of memorabilia—including my baby book, early report cards, my Girl Scout’s uniform, my cross-country results book…a grab bag of memories from my early years.

I teared up immediately with laughter and nostalgia, and then shared the contents with my family. I called my mom and, of course, she was pleased. She knew how much this gift would mean to me.

I’m still making my way through the contents, but recently I came across an interview my third-grade teacher did with me. She asked me my favorite color (blue), my least favorite food (peanut butter and jelly sandwiches), and who I thought the nicest person was (Alicia).

And then she asked me if I knew what confidence was.

I answered, “I’ve heard it before, but they didn’t tell me what it means.”

My adult self reads this and chuckles.

But then I have to wonder: do I know any better today what confidence is?

Sure, I can whip up a dictionary definition. Or, I can define it from my vantage point as a leader in the self-help/personal growth world. But do I know now, any better than I did in third grade, what confidence means?

I’m equally curious about the They I referenced, the They I looked to tell me what confidence was and was not.

Digging into that box, I also went digging into my memories, and found a few Theys:

In high school, I discovered something I was naturally good at: cross-country running. After weekend races, I’d get to hear my name and place announced over the intercom, and I’d feel a boost of confidence. Walking around the halls, I felt proud.

They, my peers, told me I was arrogant and a braggart. In my defense, I think I was too introverted to have gone around touting myself, but braggart or not, my just-budding confidence was broken for the first time.

They gave me my next lesson about confidence during my first job out of college, where I was responsible for inputting data and running summary reports. But I thought the reports themselves could use some fine-tuning, so I set out to enhance and automate the whole system, confident that it would work better than ever before.

Let’s get to the end of this awful story: the statements that I created, printed out, and oh yes, mailed to the client, were 100 percent wrong.

The next day I told my boss. I was already devastated and ashamed. It was an error of overconfidence, I was sure, and one that would soon be remedied by more shame when my boss told me, “Figure out what happened. Then come and explain how something like this could’ve happened. And you can kick yourself all the way to California.”

I was about to be relocated to California, and I promise that I followed his instructions and “kicked myself” the whole way.

My confidence was broken again.

About a decade ago, I received yet another lesson in confidence from They—this time in the form of my then best friend and yoga co-teacher. Together, we built a model for an advanced yoga teacher training we named The Compassionate Warrior: Becoming the Yoga Teacher for Today.

But one day, she hedged. Sitting across from her in a coffee shop, I heard doubt sneak into her voice. “But do we really have the skills to train teachers?”

My voice caught in my throat. “We’ve…we’ve already trained people to be teachers,” I said. “You and I together have thousands of hours of training; of course we can do this.”

“But don’t you think this is arrogant of us?” She bowed her head. “My dad is my hero,” she said meekly, “and he taught me about humility.” She shook her head. “This idea doesn’t feel humble to me.”

“I don’t think it’s arrogant to step into your power,” I argued, but quieter now.

Our project was over, and my confidence was broken yet again.

Woven in between these three big stories are hundreds of smaller stories of having my confidence undermined, challenged, or broken. We all have them. Times when we’ve been proud of ourselves, only to fail. Times when we’ve stood up to speak our truth, only to get criticized.

We use the word all the time. But what exactly is confidence?

Like all of us, I imagine, I can act confident, sound confident, and sometimes I think I actually am confident. But it slips through my fingers every time I give my grown daughters advice, or hit publish on a new article. When my confidence disappears, what’s waiting for me is fear—an emotion I would’ve easily been able to define if my third-grade teacher had asked.

Fear is universal. It’s innate. Unlike confidence, fear has been with us our entire life. Anytime the cool veneer of confidence wears off, fear is right there waiting. So, what is confidence, but a cover for fear?

Confidence is largely a facade we put on to cover up our vulnerabilities, a mask we wear to hide our fear. It’s a trademark of the ego.

Courage emerges from somewhere deep within us. It coexists with our fears and vulnerabilities. It’s a trademark of our soul.

Confidence is won through external circumstances—They bestow it, and They take it back. Confidence can only ever be rented or borrowed.

Courage is earned each time we, as Brené Brown would say, get our as* kicked in the arena. It’s built steadily, brick by brick, through our lifetime. It belongs to us—no one else can give it to us, which means no one can take it, either.

Going forward, I’m going to focus less on whether I feel confident about doing something new—pitching an article, asking a new friend to dinner, or whatever else. I’m not going to pretend I don’t have fears and doubts and second thoughts.

I’m just going to drum up the courage to do it anyway—no matter what They say.

P.S.—I did get the Instant Pot from my mom, too.