Sacred Rage: Feel it, Honor it & Practice it.

A man I think I care about deeply sends me a joke in the form of a meme—an offensive joke.

The joke would offend any woman and many men—not just a feminist woman. When I express how it makes me feel, he criticizes my sense of humor.

This affects me for days. I feel the rage fire up in my neck, a sharp feeling that has been building there for months.

I make a survey and send the meme to five men I know. Five out of five say, “Not funny.” Several say I should report it. If it is a colleague, he should be fired. I combat gaslighting with surveys. Survey says: my sense of humor is not the problem, the meme is—and I am hilarious.

A few days later, I have insomnia, sleep a couple of hours, and wake up at a ridiculous time, sad and angry.

The whole world feels heavy. I don’t want to live in this world full of men anymore, which is not to say I want to die. The beach is heavily restricted due to quarantines, and I go for an early walk. The entire beach is mine, and it’s the only way I can bear the world today.

I sit at one end and feel heaviness working its way into my chest, my eyes, and just as I am ready to release tears and sobs, I see a man riding his bike toward me, just the two of us on this whole wide long beach.

Is this the man who will attempt to rape me, I wonder? I imagine how I will fight.

It turns out to be a man I know, a man older than my father. We have a relatively pleasant conversation, but then he flirtatiously says he wants to grab me up and give me a huge hug, expresses disappointment about social distance rules.

I do not want a huge hug from him, not today, not ever. I know he doesn’t even consider what I want and don’t want.

He rides off, and I sit a little while longer. My uncried tears turn to rage.

Suddenly, the fact that this man robbed my release of tears is the sum of all the offenses: the assaults, the gropes, the abuses, the druggings, the uncomfortable moments, the mansplanations.

Suddenly all of those moments exist at once, and I am f*cking furious.

Every cell of my body feels filled with a wave of anger so fierce, so ferocious, that it is as if each one is flexing its muscles and expanding its chest, ready to explode into an attack.

I am on an eight-kilometer-long (five miles) beach in the middle of a worldwide quarantine seeking a moment alone, and even now, even here, a man will intrude and feel entitled to my space, my body.

I can’t exist anywhere as a woman. I want to scream.

I walk with my rage. I think about angry things to say, to text, to scream. I feel like I can spit fire. I have so much fire.

This energy of rage is a palpable force in my body, buzzing, vibrating. It’s unpleasant, and yet, in a way, I like it. It is a power I haven’t felt.

My breath speeds up, and I can feel it in my chest. It’s not light or heavy. It’s pure power, waiting to be hurtled at something or someone.

I want to claw and thrash. I want to pound something, pull and drag to the ground, kick and growl. I want to make noises that aren’t human. This anger is so physical.

I feel desperate, like if I can’t put this energy somewhere, I will explode.

Women are not allowed to feel rage the way men are. Young girls are not expected to react with such palpable anger to losing competitions, not getting their way, or feeling jealous—boys are.

Women are not even expected to react this way when they get beaten or raped.

This is why so many of us cry when we get angry and frustrated. We aren’t allowed the same energetic outlet for this emotion, so it bursts uncontrolled out of our eyes, leading to accusations of being too emotional. When men rage, they are just being men.

We are taught to make ourselves small, to sit in discomfort so that others may feel more comfortable.

The rage I felt on the beach that day wasn’t from slight microaggression from a friendly yet entitled man. This interaction was a trigger, releasing what had been simmering for a lifetime, years of unexpressed anger, wrath that was tired of being tears, ire that had never been released.

When the rage rises, it comes bubbling up in the back of my neck, where it sticks, wrapping around my throat that has been for so long restricted. For so many years, I swallowed my own objections in order to fit into the world patriarchy has built for me, choked on words that don’t yet exist because I have only learned language created by male tongues.

I don’t have the rage of enslaved ancestors, of robbed lands or culture, of genocide, of erased histories, or of any other rage connected to any other oppressed identity.

I have a White woman’s rage, and it took almost four decades of privileged existence to feel it. I honor it.

And I honor the rage of all others that have been subdued, abused, oppressed in any way, whose rage must be bubbling inside, generations and continents deeper than my own.

I walked with my rage on the beach until it passed. I didn’t hit anyone. Didn’t scream or rip at hair or scratch or claw or make guttural, animal sounds. I didn’t even text my ex, and I didn’t react to the offensive meme.

Now I know I can take my rage for a walk. I see this as a sacred practice. Just like gratitude or joy or forgiveness. I don’t want to feel rage all the time. The power of it frightens me a little, and because of this, I respect it. I give it divine space within the range of my emotions. I take it for a walk and then let it walk me back.

I have shared this rage and my rage walk practice with several female friends. They validated, of course. And related.

Have quarantines and pandemics given us space for rage? Is the messily changing culture of patriarchy allowing us to transmute our tears of frustration to rage? Is this something collective happening? Or do I just hang out with some angry ass women? I think all of the above.

Women, don’t be afraid of this power. We have every reason to feel this rage.

We have been slut-shamed for enjoying sex and killed for rejecting it. We have been criticized and blamed by men, by ourselves, and by our own internalized misogyny. We have always been underestimated—no more.

If you can’t find an empty quarantined beach, try anywhere, with music, or only with your vibrating cells. Find what works for you.

Rage it out. Make it sacred and hot and messy. Honor it: your divine and sacred rage. 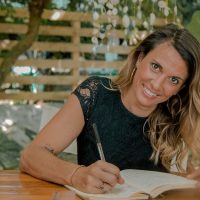 Amy Schmidt has roots in southern Appalachia and branches in Costa Rica. She traveled far and wide, following her curiosity and seeking beauty and information around the world… Read full bio