“COVID-19 Consent”: Are we Really going to Get that Close Again?

The pandemic has caused anxiety even among people who are not ordinarily anxious.

For those of us who struggle with an anxiety disorder, the COVID-19 scourge has offered entirely new avenues of fear and worry.

And now, as the vaccine spreads and the worst of the pandemic seems to be receding, those of us who worry the most face a surprising new set of anxieties about reentry into social life. Among those anxieties are handshakes, hugging, and kissing.

Verboten for so long, hugs are now possible, and many people are running with open arms to their loved ones. But what about those casual hugs among friends? Do those feel safe? The same applies to friendly kisses. There is even speculation as to whether handshakes will ever come back. This is bad news for those of us who find the elbow bump hugely unsatisfying, but good for those who’ve become—and understandably so—germophobes.

We do have historical precedent to look at. The kiss has “had its moments of crisis,” says Herman Roodenburg, a cultural historian at the Meertens Institute in Amsterdam. In 1439, England’s King Henry VI banned kissing to combat an epidemic of bubonic plague that had ravaged Europe over the previous century.

Kissing again lost favor about 160 years later, during the Great Plague of London. It was replaced with curtsying and waves, according to The Science of Kissing by Sheril Kirshenbaum. But the science around the spread of germs wasn’t yet understood, and so even after millions had died, the hiatus from kissing once again failed to endure.

The 1918 influenza pandemic was the most severe pandemic in recent history. In the 1920s, articles appeared in the American Journal of Nursing that warned of hands being the agents of bacterial transfer and recommended that Americans adopt the Chinese custom at the time of shaking one’s own hands together when greeting a friend.

But somehow, it seems we always cycle back to our old ways with handshakes, hugs, and kisses. And there’s a reason for that: it’s how we’re wired. Hand-holding, hugging, and kissing increase our immune function and relieves stress, while a lack of physical contact has the opposite effect. According to Asim Shah, M.D., professor, and executive vice chair of the Menninger Department of Psychiatry at Baylor College of Medicine, “When someone is touch starved, it’s like someone who is starved for food. They want to eat, but they can’t. Their psyche and their body want to touch someone, but they can’t do it because of the fear associated with, in this case, the pandemic.”

He points out that touch starvation increases stress, depression, and anxiety, and triggers a cascade of negative physiological effects including suppression of the immune system, which increases the risk of infection. He adds that this may also lead to sleeping problems and, if continued for an extended period, can even lead to post-traumatic stress disorder.

But what do we do about the lingering pandemic anxiety that we are carrying as we find ourselves among friends and colleagues once again? Are we doomed to repeat again and again the uncomfortable “they-step-in-and-you-step-back do-si-do?” Or must we simply suck up the anxiety of feeling pressured into too-much-too-soon physical contact?

What we need now is personal autonomy to rewrite the script of social norms such as greetings. Maybe in a post #MeToo society, consent from both parties, even for a handshake, is a great place to start. Maybe we need to give ourselves and others permission to clearly communicate our comfort levels and boundaries.

And for those whose anxiety is more than just a little discomfort, the key is finding strategies to reduce the stress caused by the idea of physical contact, so we can go back to a safe and mutually agreeable “touching” that will relieve the stress caused by touch starvation. We can use various strategies to help us manage anxiety as we enter situations in which we can expect physical contact.

Here are some of those strategies we could adopt:

What stories are you telling yourself about handshakes? How can you change that story? Let’s assume we can’t change the circumstances surrounding the reentry and our post-pandemic realities. But what we can control is our thoughts around it. Our thoughts are optional—always.

Question the accuracy and probability of your statements. For example, “If we are in a crowd, we will get infected,” or “That handshake will give me COVID-19.” Do your research and due diligence to determine the risks involved, weigh them, and make an informed decision rather than having a knee-jerk reaction.

Bringing a new level of awareness to reentry can help us navigate our post-pandemic world. In contracted awareness, fear rules and we view everything as obstacles. In expanded awareness, we find space around the fear and fill it with compassion. When you turn the lights on to your thoughts, what do you learn about your fear? How can you extend compassion to that?

Anxiety is all about maintaining control, and as the world opens up again, the control we thought we had in the pandemic-constricted world evaporates, triggering new anxieties. Now, we are out of the house and out of control once again. But when we overly focus on our lack of control, we can get swept up in our “what if” thinking. But changing the negative ending to a positive one can relieve our stress level and balance the likelihood of all possibilities. 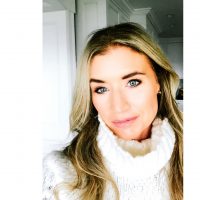 Wendy Tamis Robbins, author of The Box: An Invitation to Freedom from Anxiety, is also a speaker, coach, and corporate attorney. Despite her debilitating anxiety disorder, … Read full bio