Dismantling Shadow Work: What it is and what it Isn’t.

Shadow work has become the hallmark of spiritual enlightenment.

You’ll be hard-pressed nowadays to find a spiritual entrepreneur who hasn’t done some form of shadow work. Since Car Jung came up with the concept of the shadow, people have interpreted the work in various ways.

The shadow, according to Jung, is the dark and unknown part of our personality. Having “done the work,” however, does not make someone more enlightened or more special than the next person.

What shadow work does when properly understood and integrated is bring a sense of wholeness.

To understand shadow work, let’s begin by looking at what it isn’t.

The shadow, like arms and legs, is a part of you. It belongs to you. This is where many people get it wrong. They assume incorrectly that the shadow does not belong to them, which only fuels their anxiety. Whatever you integrate into your self-identity can only be transmuted or repressed. It cannot be cast adrift or burned away during a full moon ritual.

Shadow work isn’t about becoming a new person because there’s nothing wrong with who you are. We’ve been conditioned by our caregivers, society, and the media to think we must hide, suppress, or sacrifice those parts of ourselves that are deemed undesirable.

Desiring to be something other than who we are looks and feels like self-loathing. Shadow work is about returning to wholeness. It’s a reeducation.

Shadow work is not “journal work.” And, although helpful, it is not a written reflection on your less desirable traits like aggression.

Shadow work is not meditation. Meditation is passive. It’s the soul’s job to wake us up to what we’ve stuffed away in boxes in the basement of our minds. The soul tries to assist us in this process of unpacking through projection.

There are two ways in which we project onto others:

Recognizing when we are projecting asks for vigilance and takes effort. Does your colleague rub you up the wrong way because of their “need for perfection,” or perhaps you are a perfectionist?

Shadow work doesn’t come with a date stamp. There are parts of us that are yet to be discovered. This is because we are always in the process of becoming, which means we are constantly adding, adapting, and refining our qualities.

Shadow work is never “done.” It is lifelong work.

When we say we’re “done,” we can only mean we’ve done part of the work of integrating those aspects or qualities of ourselves that we have denied or suppressed but have hit pause on identifying and bringing to the light other qualities.

Now, let’s take a look at what shadow work is:

Shadow work is identifying what belongs to you and what doesn’t.

In our craving for acceptance and love, we often acquire and mimic qualities that we were not born with. We sacrifice our creative abilities like dancing or singing because a caregiver may have been critical of these talents and transmute qualities like wildness into meekness to please others.

Shadow work is also a reappraisal of light and dark, good and evil. What is perceived as wrong or even evil in some cultures is considered good in others. Furthermore, qualities that we may think are universally appreciated like compassion or tenderness are regarded as weaknesses by some people. Many so-called negative emotions like anger are suppressed because we fail to recognize the protective and vivifying force behind them.

Is your anger trying to protect a creative ability that you suppressed as a child? Is it trying to protect you from being defined by others? Every emotion is a signal for something deeper at work. Shadow work demands we revisit our beliefs about what’s right and wrong.

Lastly, shadow work is the daily and conscious act of honoring our shadow through real and symbolic acts. This includes acknowledging our less desirable traits in ways that are not harmful to ourselves or others, such as writing out our anger or painting our loneliness.

It disrupts our monochromatic life of lukewarm interactions. It demands courageous participation and vibrancy.

Shadow work is the great work of coming back to ourselves. 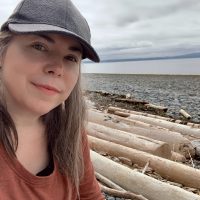 Yolanda B. McAdam is an astrologer, animist, teacher, and writer living in Vancouver, BC. She is obsessed with reawakening the world to the interrelatedness of all beings. … Read full bio