Tax the Churches: How Religious Freedoms turned into a Threat for Democracy.

Franklin Graham whose so-called “ministries” do not pay taxes, and he complained on Twitter about Americans receiving stimulus money during the COVID pandemic.#TaxTheChurches pic.twitter.com/toC7Fi8iRK

Dear religious folks, please read this article before throwing insults at me.

Just to be clear: I am not against religion.

But I don’t like how religious groups are hijacking the political debate. There are good reasons why Thomas Jefferson and the First Amendment support religious freedom—but this wasn’t meant to be a one-way street.

Religious freedom itself is a good thing, religion itself can be a beautiful thing, but why should one religious group tell others what to believe?

And that’s where it gets tricky. 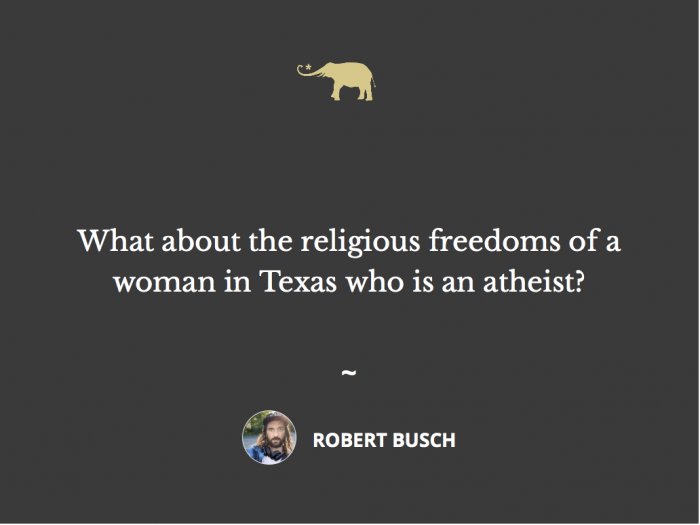 Why should the state of Texas create a law that is solely representing their religious voters? And even more important, why are religious groups allowed to use their influence on lawmakers?

Why are religious groups allowed to collect billions of dollars to force their will on society?

The IRS grants tax exemptions to religious groups, but they are aware that religious groups play a role in politics. The Texas abortion law is by far not the first case of churches disrespecting the separation of church and state.

Of course, the Taliban and the Republican party in Texas are not the same, but there is a similar dynamic.

The Taliban want to force Sharia Law on the people of Afghanistan. They don’t want separation of church and state; they want full power. They don’t care much about folks with other beliefs; they think that they are the only ones who got it right—does that ring a bell?

The idea of religious freedom is not that religious groups enter a competition to take power in a country; it is meant to protect the individual rights of every person, no matter what they believe.

Believing is not the same as knowing. At the same time, not everything that happens in this world can be understood—and that’s where religion comes to play. It can give us hope, consolation, and inspire us to be a better person. Nothing wrong with that; these are good things.

But when someone feels entitled to execute God’s will because they feel entitled enough to speak for God, we are entering dangerous grounds. Who is going to judge if that person really speaks for God? And how would that judge find out what God actually wants?

Maybe God wants women to have the freedom of choice? Maybe God is a woman? Maybe there is no God?

I don’t know any of these answers, but that’s also the case for everyone else. We will never know the answers, but we can choose what we believe.

The only way out of religious wars (as European history teaches us) is science. Science doesn’t work like religion; it is based on knowing, not believing.

Scientists need to be able to defend their claims with data, and every scientist is allowed to question published studies from other scientists.

The only way to grant religious freedoms to everyone is finding common ground—and science is that common ground. It’s a way of finding solutions to problems that cannot be solved by faith.

But one doesn’t exclude the other. A sociologist can write a thesis on how religion helps average people to find a purpose in life. A psychologist is allowed to claim that religious people run less danger of falling into depression. And the well-known Anonymous Alcoholics (AA) group is totally welcome to use their faith to help folks with addiction problems. Churches are welcome to fund scientific research backing up their traditions—just like yoga teachers are more than welcome to use neuroscience to explain the benefits of meditation.

If a religious group finds out that their practices are of benefit, they are welcome to share their scientific knowledge with society.

Unfortunately, that is not the case in politics. Instead of using science, many Republican lawmakers base their opinions on religion. And it’s even worse than that; they use religion to cover their real agenda.

As Jane Elliott pointed out years ago, Republicans fighting against abortion don’t care as much about religion as they want us to believe. What they really care about is having more White babies—read this article to find out more.

When Franklin Graham rants against stimulus bills because he thinks that “God created us to work” while getting millions of dollars from donors to push his political agenda, then we have a problem.

Religious groups fighting against mask mandates and vaccines are not using scientific data to back up their demands. Instead, they try to justify their actions with the Bible—and we are all paying the price for that.

Technically, religious groups are not allowed to take sides in politics, but, of course, they are trying to find a way around that.

When I lived in Costa Rica, I witnessed how so-called charity organizations were offering programs to Costa Ricans with the promise to teach them how to build their businesses. Sounds good, right? But why did all my Costa Rican friends who joined that program start to post bible quotes on their social media?

Helping people is something religion is pretty good at, but what happens when helping others is just a way to gain control? What if religious groups fund private schools and switch the curriculum from teaching evolution to preaching creationism?

As mentioned in the beginning, religious freedom and religion itself are not bad things, but using big money to force Christian beliefs on everyone is a threat to democracy.

But these three topics have one thing in common: religion is used to sugarcoat a right-wing conservative agenda.

If we want to point fingers at religious extremists like the Taliban, we need to remind ourselves of what separates us from them—and that’s the idea of freedom and liberty that aims to protect the rights of the individual.

Freedom and liberty shouldn’t be limited to Christian folks in the United States—that’s the core idea of the land of the free, isn’t it?

If religious groups take sides in politics, we have to take the next logical step: #taxthechurches