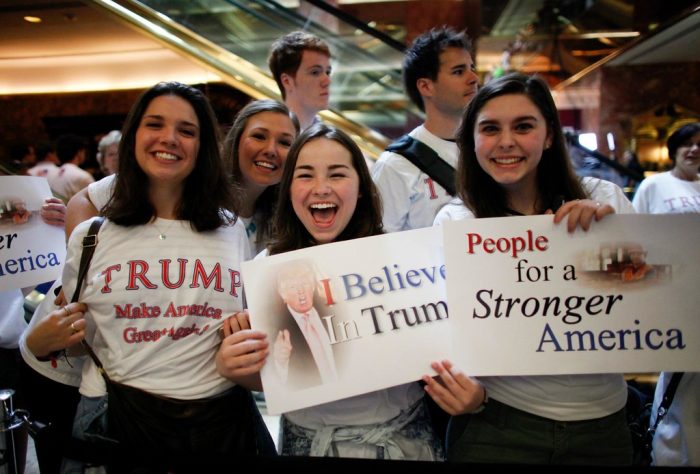 *Editor‘s Note: Elephant Journal articles represent the personal views of the authors, and can not possibly reflect Elephant Journal as a whole. Disagree with an Op-Ed or opinion? We’re happy to share your experience here.

As the nation is mourning the passing of Ruth Bader Ginsburg, Trump did not waste any time to push his third Supreme Court during his presidency into the vacant seat.

Judges get appointed for a lifetime and therefore some presidents get to choose more of them than others. Democrats are raging that Republican Senators are willing to support Trump in nominating his third judge less than 40 days before the elections.

While that has been debated extensively on the media, we almost oversee another game he is playing to please his core supporters.

By nominating Amy Barrett the president is gaslighting the nation once again.

Right after RBG’s death, he already announced that he would pick a woman for the vacant seat and that’s where the gaslighting starts.

RBG was a fighter for women’s rights; she can’t be replaced by simply putting any other woman in her seat. The assumption that as long as he picks a woman everything is fine would be more than naive.

Let’s take a look at Amy Barrett’s religious beliefs. Her family is associated with the “People of Praise” organization. These people are so fundamental in their interpretation of the bible that even most Catholics reject this cult. Barrett’s community clearly states that the “man of the house” has the last word on all important decisions.

This brings up the question: why didn’t Trump nominate her husband for the Supreme Court then?

These dynamics remind me of “The Handmaid’s Tale” where women are mainly seen as servants to a patriarchal society. The book that has also been the base for operas, movies, and series is a warning to all of us.

It seems as if Trump is aware that some people might perceive him as a women-hating racist. Apparently, he decided to do something about this by picking people for certain roles to flip the narrative.

Right after the Black Lives Matter protests started the Trump party presented Candace Owens to the public. As if they were trying to say: “Look at us, we are not racist, we found a black woman agreeing with us.”

They could have just picked Charlie Kirk to make these derogative statements about George Floyd but that would have not had the same effect.

After completely messing up his White House Briefings when he suggested injecting bleach, he picked Kayleigh McEnany to be the new Press Secretary.

Since then, she had been defending Trump’s lies with snarky answers to journalists at the daily briefings. I have to admit, she is pretty good at that, but does that make her an advocate for women’s rights?

I don’t think so. He could have also picked Ben Shapiro to be the new press secretary but by picking Kayleigh the president tries to look like a supporter of young women.

Everyone criticizing Kayleigh McEnany as a liar will be hit by the accusation of discriminating against her appearance. She is a beautiful woman and many MAGA supporters probably enjoy looking at her, but it doesn’t make her less radical or dangerous.

As if that was not enough, Trump is now picking an ultra-conservative catholic cult member as a judge for the Supreme Court. One could think that picking a woman would strengthen women’s rights in the United States but that is not the case.

Amy Barrett is strictly against abortion, same-sex marriage, and many other things feminists fought for throughout the last decades.

Looking at Candace Owens, Kayleigh McEnany, and Amy Barrett we see the underlying strategy of the MAGA campaign. They know that liberals see through this game of hiring con artists to stir up emotional debates but they are also aware that this has worked out pretty well so far.

When I wrote about Candace Owens, I was accused of being a racist. After writing about Kayleigh McEnany, I was called a misogynist in the comment section of our main page at Elephant Journal. Let’s see what happens after this one.

Amy Barrett is just another example of Trump following the plot of “The Handmaid’s Tale.” These women working for him don’t have a say at the end of the day.

They are there to support his narrative not being a chauvinistic racist at all. None of these women really care for women’s rights or racial justice, they mainly care about themselves—just like their boss.

People always wonder why Trump has women supporting him, but there is a simple and troubling explanation for that. Just like in “The Handmaid’s Tale,” these women might not be at the top of society but at least they are close to the inner circles of power.

As long as “southern suburban housewives” can look down to minorities and poor people, they are fine with their sexist husband cheating on them. Which brings us to another interesting part of “The Handmaid’s Tale”: Jezebels.

There are statistics that every Republican Convention is usually also good business for strip bars, dating apps, and other adult entertainment related venues. It seems as if these patriarchs voting for Trump are pretty liberal when it comes to their own sex life.

Jezebels are a caste of women in “The Handmaid’s Tale” who are mainly responsible to entertain their men.

The underlying role models can be found in Trump’s references about “grabbing p***y” and his behavior toward women in general.

In my opinion, the worst moment of Trump’s presidency was when he picked Brett Kavanaugh as a judge for the Supreme Court. Seeing him crying after getting interrogated by Kamala Harris, I was sure that he would not get that seat, but he did.

Picking a man accused of sexual misconduct for the Supreme Court and then selecting an ultra-religious woman as the next judge would be funny if it wasn’t so troubling.

It shows the true colors of this president: Protecting the male offenders and praising the subjugated women.

The president wants us to be angry at him and give his supporters enough talking points to argue with us on social media. As we have seen on “The Social Dilemma,” the internet is playing a huge role in the outcome of the elections.

A bit more than a month to go and Trump has once more escalated things to the next level.

He already threatened Democrats that he wouldn’t accept the results of the election and might take the case to the highest court of the country. If he succeeds with Amy Barrett’s nomination there would be a 6:3 conservative vote in the Supreme Court—guess what they would decide.

This is all more than troubling but we shouldn’t fall for that bait.

Let’s not debate with MAGA fans on social media about Trump being a supporter of women or not.

Let’s not argue with old white men about the credibility of Candace Owens.

Let’s not discuss the physical attractiveness of Kayleigh McEnany and how Trump voters feel about her.

Let’s not argue fight about what Republican Senators said four years ago.

Here is what we can do instead: Go Vote!

There is only one way to end this American nightmare: Get out and vote.

Don’t waste time arguing with people that can’t be convinced, instead, encourage those who usually don’t vote to register.

Only if the Democrats win this election by a landslide there might be a peaceful transition of power.

And if Trump still wins? In that case we better all watch “The Handmaid’s Tale” to find out where this president might take us.

RBG’s Ceremony & the Consequences of Amy Coney Barrett’s Confirmation. If Trump Remains in Power. It’s Gotten Ugly Out There: Let’s All just Agree on One Thing going into this Election.
See relevant Elephant Video