The hidden Cause of Domestic Violence, Disruptive Passengers & Brawls in Supermarkets.

Fight breaks out at Florida school board meeting after protesters against mask mandates appear to push doctor || By: Justin Vallejo https://t.co/4w5eKpnsXT

We see videos of disruptive passengers and folks fighting in public—and I am asking myself, “What is wrong with people?”

What drives folks to start fistfights on planes or at the cashier of their local grocery store? Why are people losing it so quickly?

Of course, we could blame the media, lockdowns, and politicians—or ask ourselves what to do about it. How can we actually prevent these kinds of situations?

First of all, we might need to change the wording of the question. Trying to prevent an argument is a mindset that actually creates fights. I know it sounds weird, but let me explain.

There is a difference between fighting and having an argument.

And that’s exactly where the problem starts. Society taught us to be nice, non-confrontational, and peace-loving—and these are all nice goals to have—but what if things go wrong?

I also like sunshine better than rain, but that doesn’t stop the rain. The same logic applies to arguments.

It’s absurd to think that it is possible to avoid arguments with others 24/7. So, instead of asking how to prevent arguments, we should think about how to handle disagreements before they turn into fights.

Someone not speaking up about their frustration does not mean that they aren’t frustrated. But if we teach our children to avoid confrontation at all costs, they will turn into emotional pressure cookers as adults. The longer we swallow our anger toward something, the more anger we will feel over time.

Jim Carrey beautifully describes depression as “your body saying f*ck you, I don’t want to be this character anymore, I don’t want to hold up this avatar that you’ve created in the world. It’s too much for me.”

Playing the role of a person who never disagrees not only causes depression, it’s also the reason for folks to lose their sh*t. Many of us play a role in their family setting or at work that is causing us to feel depressed and angry at the same time.

Many of us feel trapped in toxic marriages and unhealthy work environments because we don’t feel strong enough to express our disagreement in any way. Some of us are not happy with society but too lazy to jump into arguments about social justice. We have become masters of ignoring our problems.

Netflix, social media, and substance abuse are three of the most popular ways to create a bubble around us that protects us from all these inconvenient confrontations.

But what if we can’t hold back anymore at some point? What if we feel that someone crossed our boundaries? What if someone bursts our bubble?

As individuals, we will always have disagreements with others. Sometimes about small topics like where to go for dinner and other times about big issues like who to vote for—but we will never be able to agree with everyone at all times. So, let’s stop trying that.

But why should we leave our peaceful shelter and start arguing with others? The answer is simple: because otherwise, things might escalate sooner or later.

And that sooner or later is right now: we see people fighting on planes about face masks, we see parents physically attacking others at school board meetings, and we hear about a rise in domestic violence. We have reached a point where adults regularly act like five-year-olds when things are not going their way.

Here are the three steps of arguing:

2. Figuring out the pros and cons of the different positions on an issue.

3. Weighing those positives and negatives to reach a conclusion.

During the lockdown, many folks drifted into rabbit holes of conspiracy theories and got trapped in filter bubbles on social media. And now, we see these people confronted with reality and not being able to deal with it.

They are not willing or able to figure out the pros and cons of their actions, they lack any kind of empathy, and they are incapable of finding a middle ground.

Many of these folks had dads who would end any argument by banging their fists on the table (or worse). It is easy to make fun of all the Karens misbehaving in public, but wait until you meet Karen’s husband or dad. These people never learned to agree to disagree, they avoid trouble at all cost, but if it happens, they are ready to fight.

Unfortunately, this is exactly what we see in politics these days. When Marjorie Taylor Greene, who is an elected politician, calls Joe Biden a “piece of sh*t” on social media, what can we expect of her voters in an argument about politics?

When Tucker Carlson talks about an upcoming revolt against the government because he doesn’t agree with certain policies, what kind of signal does that send to the average Fox News viewer?

How are we going to address climate change, COVID-19, racial inequality, and an economic crisis if we all act like five-year-olds? The answer is simple: we won’t.

The only way out of this is to accept that trying to prevent confrontation does not make the problem go away. Sometimes we need to sit down and have an uncomfortable conversation with loved ones, coworkers, or random folks on a plane.

Banging our fists on the table doesn’t solve any problems. Not speaking up until we feel like punching someone doesn’t help anyone. 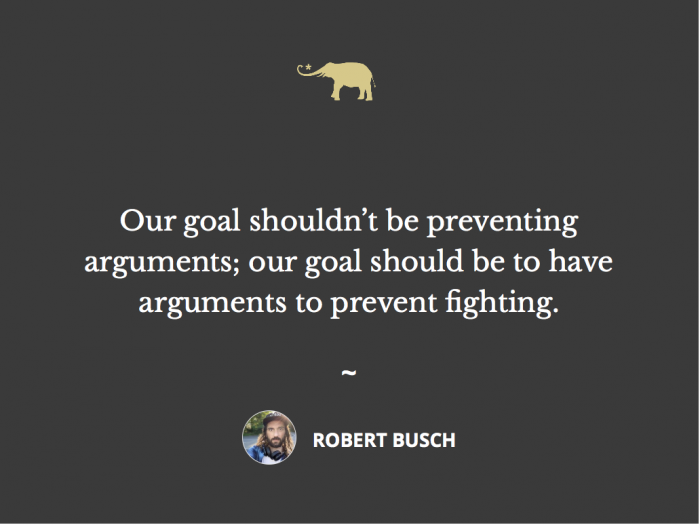