If we’re going to combat the climate crisis, we must face hard scientific truths and take action. Visit https://t.co/7Rx6qOmRf0 for ways to get involved. #DontLookUp pic.twitter.com/Bnw9pM71Px

I’m not sure who originally said it, but there is a meme going around that reads:

“Every disaster movie starts with the government ignoring a scientist.”

When I first heard about this comedy/satire that was receiving media hype as well as vigorous thumbs up from some people I know who are influencers with social justice sensibilities, I was reluctant to expose myself to even more depressing news.

I rationalized that I already take the climate crisis and the pandemic seriously, so why would I want to set myself up to feel even worse about things that I don’t have the sole power to change, as much as I wish I had a magic wand that could?

So, on New Year’s Day (great timing to begin the next 12 months), I took a deep breath and snuggled under the covers, just in case I felt so crummy that I couldn’t pry myself out of bed after watching it.

I’m so glad I took the leap. The two hour and 18 minute run time was a good investment and provided food (however bitter) for thought and fodder for this article.

“Don’t Look Up” is a not so thinly veiled exposure of the failings of the government, climate crisis deniers, conspiracy theorists, people who think the pandemic is a hoax, social media, and corporate interests over the survival of the planet.

The casting is superb as Meryl Streep portrays a female version of Donald Trump, down to the self-aggrandizement, minimizing the crisis, and holding rallies, where the chant “Don’t Look Up” mirrors many of the quotable statements he had made while in office and continues to express to this day.

Jonah Hill plays her son Josh, who is her chief of staff by virtue of nepotism, Leonardo Di Caprio takes on the role of astronomer, Dr. Randall Mindy, and Jennifer Lawrence is his student, PhD candidate Kate Dibiasky for whom the comet that is hurtling toward Earth with breakneck and destructive speed is named.

Once she makes the discovery and attempts to alert the president, the pentagon and NASA, she finds no allies with the exception of Head of the Planetary Defense Coordination Office at NASA, Dr. Teddy Oglethorpe, played by Rob Morgan. The three of them become outspoken advocates for taking this certain path of death and destruction seriously. They have six months to find an answer and prevent the comet from striking the planet.

The conversation that takes place in the oval office is likely not too far from reality had this occurred during the Trump administration. The urgency is played down as hysteria and the key players in government and big biz look for ways to monetize this devastating outcome. The media in the form of Brie Evantee, a lascivious interview show host, with Tyler Perry playing her jovial co-host, Jack Bremmer, makes light of it and social media focuses on the love life of music star Riley Bina, played to perfection by Ariana Grande, rather than the comet that would certainly mean the end of her career and cause their market shares to take a nose dive as precipitous as the trajectory of the space boulder. 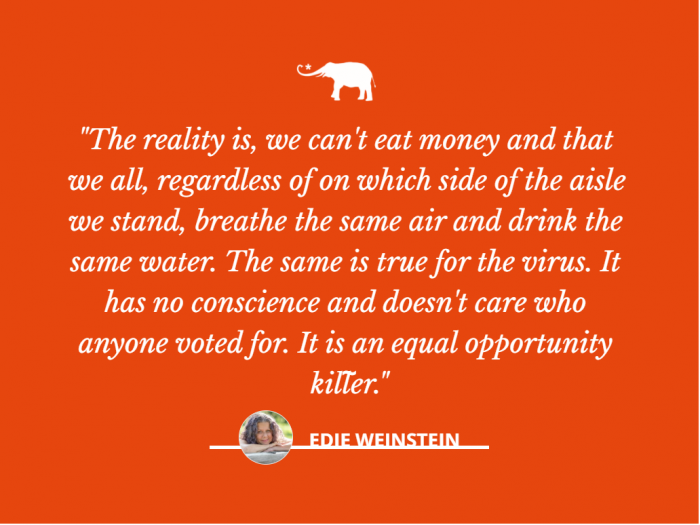 Mark Rylance plays slimy Peter Isherwell who is the CEO of a telecommunications company who wants to mine the money out of the comet. Even some Muppets get cameos.

So, what are the chances of this occurring in real life? According to Dr. Amy Mainzer, an astronomer whom the producer tapped to consult on the movie, it’s “really, really unlikely.”

She reassures us, “The good news is a really major event like what’s portrayed in the movie, we know that, that can’t happen regularly…because we’re here,” Mainzer explained to Yahoo Canada. “If that sort of thing happened on a regular basis in our time span, compared to the span that humans have been on the planet, well, we wouldn’t be here.”

The movie has received mixed reviews and my guess is that people who are in the camp of President Janie Orlean/Donald Trump would pish posh the concepts presented in it and call it virtue signaling or an attempt at wokeness. They would put potential profit in the immediate time line over the scientifically certain annihilation of life on the planet.

The reality is, we can’t eat money and that we all, regardless of on which side of the aisle we stand, breathe the same air and drink the same water. The same is true for the virus. It has no conscience and doesn’t care who anyone voted for. It is an equal opportunity killer.

What was the most moving aspect of the film were the scenes of the animals who were going about their business of existing, and who had no inkling that their obliteration was imminent. Many people are oblivious as well. That mirrors the environmental crisis that might be halted if the entire world took it seriously. Our best and brightest minds could apply their knowledge to ameliorate the effects and prevent it from worsening.

I was also touched by the strong bonds of love and family that were reinforced at the end of the film.

The star-studded cast giving it their acting all, made a disaster movie that was anything but a disaster. It was an emotional roller coaster ride with needed laughs at the all too true absurdity of the way we function on the planet.

The film is preaching to the choir, but it may also make some inroads with those who need a good wake-up call. We don’t have the luxury of subtlety. It isn’t one of those situations where we all have to agree to disagree. I’m glad that director Adam McKay and the actors involved are using this platform to loudly, pointedly, and necessarily present this call to action.

Please don’t wait until it’s too late to utter the words of Dr. Randall Mindy, “We really did have everything, didn’t we? I mean, when you think about it.”

I won’t spoil the ending, but as I had been encouraged, don’t turn it off until after the credits run, since there is a chuckle-worthy comeuppance that occurs.