How do we Solve Rising Health Care Costs? Try Yoga. 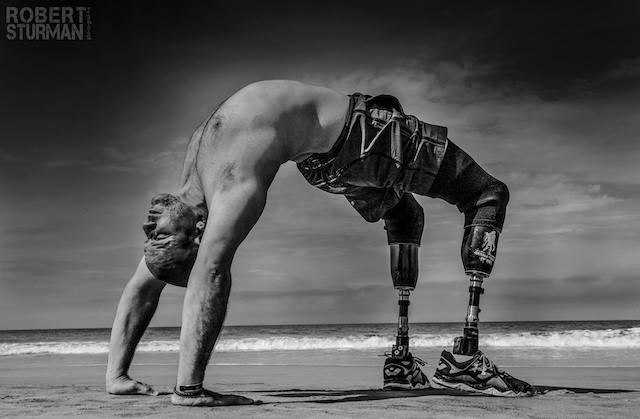 Health care costs have an enormous impact on the American economy, representing a large portion of prison budgets, addiction and substance abuse recovery, treatment for disordered eating, and for survivors of cancer.

>> Every year, the federal government spends about $3 billion to treat veterans and soldiers suffering from post-traumatic stress disorder (PTSD).

>> In 2015, about 15.5 million Americans were living with cancer and/or cancer treatments’ side effects. By January 1, 2026, it is estimated that the population of cancer survivors will increase to 20.3 million.

Each and every person in the United States is paying for these costs. Yet there is a cost-effective intervention that is still largely untapped by institutions in this country: yoga.

Yoga is a comprehensive system of practices for physical and psychological health and well-being that incorporates multiple components, including physical postures, breathing exercises, and meditation/concentration techniques. And research suggests that this set of practices may benefit many of the medical conditions exhibited by cancer survivors, inmates, alcohol and substance abusers, and by veterans recovering from PTSD.

For instance, yoga, meditation, and a variety of other complementary modalities show promise in preventing eating disorders and supporting a healthy relationship with food and body image—while costing only $60 per session once a week.

Yoga has also demonstrated efficacy in the palliative treatment of a variety of mental health and medical disorders: cancer, chronic pain, arthritis, fatigue, heart disease and hypertension, insomnia, migraine headaches, depression and anxiety, and much more. As an auxiliary intervention, yoga has been shown to complement cognitive therapy approaches such as cognitive behavioral therapy (CBT).

Today, suicide, addiction, and substance abuse are increasing among veterans who have been diagnosed with post-traumatic stress. But, there’s also a growing body of research showing that yoga offers a real chance for hope and healing for veterans struggling with trauma-induced symptoms.

A group of 17 veterans—six women and 11 men—took part in the research, attending weekly classes to learn about different yoga practices including pranayama, asana, yoga nidra, meditation, and gratitude. Changes in their well-being were tracked using various scales.

Strikingly, study participants showed reductions of almost 30 percent in their scores on the PTSD Checklist—one of two systems known as the gold standard of assessing whether people are reducing their symptoms of post-traumatic stress.

Veterans who took part in Mindful Yoga Therapy classes over several weeks perceived their own well-being to have improved after each session. For example, one participant ranked their well-being at 2.5 at the first session, and reported constant improvement over the course, peaking at almost 3.5 by the final session. 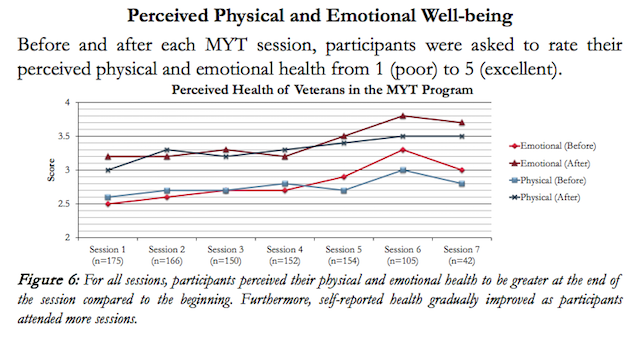 The veterans’ perceived levels of their own stress also plummeted after taking part in the yoga program, showing a direct connection between Mindful Yoga Therapy and reduced symptoms of PTSD. Using a Perceived Stress Scale that ranks participants’ belief of their own stress levels from zero to 40, veterans who practiced Mindful Yoga Therapy recorded an overall drop from roughly 27 to 20—a major reduction that promises to help people recovering from post-traumatic stress.

The research also indicates that the practices have benefits beyond yoga. Several participants said they used the skills developed during MYT—such as managing anger and relieving pain—to better inform other aspects of their lives, further helping them cope with their PTSD.

And, critically for institutions, the cost of using Mindful Yoga Therapy in conjunction with a traditional treatment plan is nominal.

Yoga is gradually beginning to make inroads as an accepted and effective modality among American institutions. The ambassadors for this cultural change continue to certify yoga instructors who are honing their professional tools and bringing high-quality programming into hospitals, treatment centers, prisons, and more.

Mindful Yoga Therapy, for instance, offers a 100-hour yoga teacher training to instruct teachers who are already certified as yoga instructors on how to share specific practices that are worked into a 12-week protocol. The trained instructors then partner with local health care facilities, including the Veterans Administration, to offer this protocol in combination with clinical therapy to help veterans and other populations impacted by trauma develop self-control and mindfulness as a strategy to improve their well-being.

Supporting the growth of quality trauma-informed yoga programs, and the work of skilled teachers, is one way that we as yogis, mindful business owners, professionals, and human beings can support this model for cost-effective healing.

The nonprofit I co-founded with my yoga teacher, Beryl Bender Birch—the Give Back Yoga Foundation—is dedicated to making this work easier through five programs that offer protocol-based, trauma-sensitive group yoga practices and teacher trainings specifically for working with underserved populations.

To date, research on these programs is still in its infancy. But a growing body of data shows vast potential for institutional settings such as Veterans Health Administration hospitals, veteran courts, prisons, and treatment centers to benefit from implementing these fact-based yoga programs.

And, that potential benefit doesn’t stop at the lives and well-being of recipients. Potentially, widespread adoption of these programs could have a great impact in reducing treatment costs to the government, and, thereby, American citizens.

So drop a line to your senator—and roll out your mat. 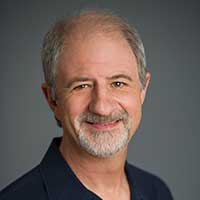