How to use a Man-child’s Words to Fuel your Badass Femininity. 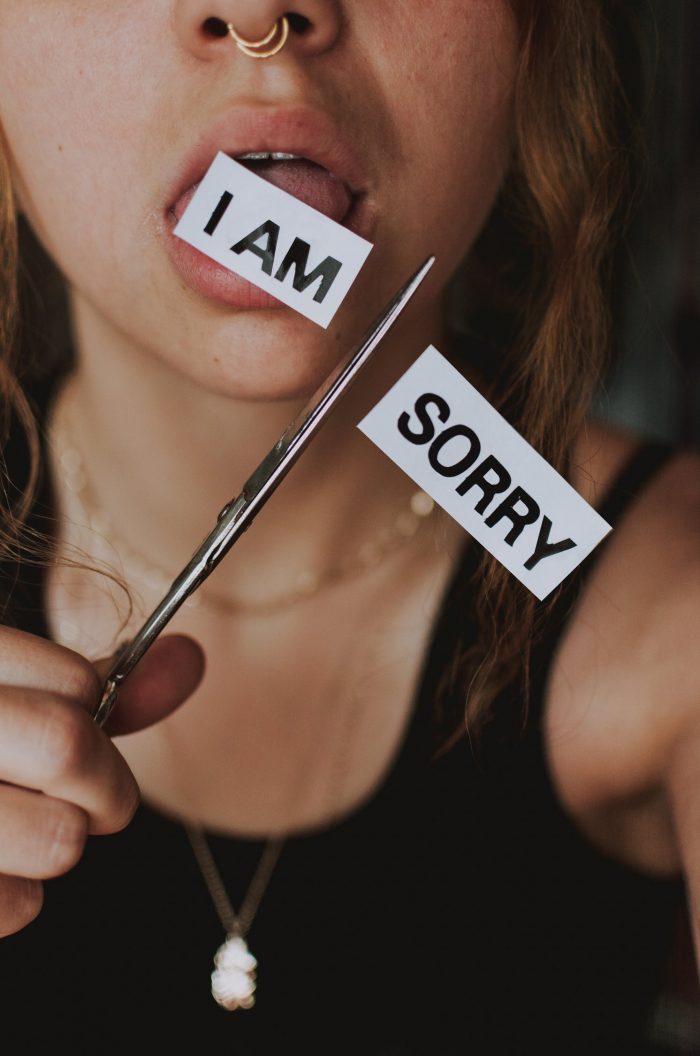 “I’m not saying you’re fat, but I normally date models.”

He stood over me, yet he looked down at the ground when he said it.

I had been laying on my black leather couch in repose. I raised my head, fixed my gaze directly into his green eyes, and coldly decreed, “If you think I’m fat, that’s your problem and not mine. You can see yourself out of my apartment.”

His eyes lifted and met mine.

His posture crumpled. Once broad and imposing, his body now took the shape of a chastened child.

Wordlessly turning his back to me, he rounded the corner. Now out of my sight, he silently made his way down the long hallway, and I heard the squeak of the front door.

Inside, my Christmas tree glittered. As the miniature white lights bounced against the collectible crystal decorations, I lifted my body from the couch and stood.

My five-foot-four body gained the height he seemed to have lost as I followed his wake down the hallway to turn the heavy metal lock of the front door.

That click separated me from a life as an ornament for someone else.

My childhood was one of being chided for being “fat.” I remember dissolving in a graffitied bathroom stall—salvation from the barnyard sounds one of my 15-year-old classmates bleated in my direction.

My family often spoke to me about my weight in tones of “concern.”

At first, I was confused, but as an adult, these words about my appearance were now a report card of how I achieved the mission I had unknowingly signed up for by being born with an XX chromosome: to be visually titillating.

Verbal evaluation held a certain measure of delight but disgusted me even more. I had the eyes of male attention, but not in the way I wanted it. And not for what I valued most about myself. Yet, it was made clear to me that that sort of attention was not only all I was going to get, but it was also all I could expect.

I was advised in hushed tones from the women around me that “men are visual,” justifying and excusing these one-dimensional narratives and evaluations.

I, therefore, learned to not only accept these compliments but also to purposefully cultivate them.

Clothing could garner initial attention to catch a man’s eye, so I combed through vintage racks to find the right pieces to hide and disguise the body parts that were sure to rank lowest on the scale of “male” interest while accentuating those ranking the highest. My sole mission was to score the pieces most certain to generate that prized compliment.

My hair and makeup were of obvious importance if I wanted to glitter in the spotlight of the invisible pageant stage and garner positive scores from the judges. I invested the time and the money to stand out just enough to be different but fit in just enough to not get passed over.

Yet every time I said “thank you,” to shallow, evaluative words, I felt my stomach drop. I wanted to be admired for my brain instead of my body, my clothes, my hair, my skin, or my perfume.

I didn’t know what I was unknowingly accepting the first time I gritted my teeth into a smile receiving those words about my appearance in those darkened spaces.

That simple “thank you,” became an unspoken invitation to men to continue dissecting me, evaluating me, and approving of me long after we exited the darkened beer halls or glittery nightclubs or cozy restaurants.

Later, in the spotlight of relationships, those words became an unsolicited invitation to continue directing evaluation my way—both from men and from myself: how could I increase the value of my reflection in their eyes? Now cyclically emboldened, the words of these men took shape as I heard man after man—different boyfriends—uttering “charming” phrases that included:

>> You should work on your bum before my family meets you.

>> I don’t understand why your hips are so big. Can’t you just exercise more?

>> It might be better if you didn’t wear that negligee because you have some—hmmm—cellulite.

My eyes would look away as they said these things, and I would feel heavy, internalizing my failure to be enough.

By inadvertently deciding to care about their opinion of my body when these men first uttered their words of compliment, I unknowingly gave consent to hear what was now a critique months later: how I could be more attractive, more appealing, more satisfactory.

How I could be smaller.

We think we can fix our flaws to be enough for others, as their compliments once led us to believe.

We upgrade our wardrobe.

We change our hair and apply perfume again.

Like recycled gowns, we try to infuse new value to ourselves, waiting for the spotlight to re-appear so we can shine again as they gaze at us, earning approval.

We are never enough. We grow weary under the weight of this project.

For me, shattered and my value lost, my solution was to look for new partners.

Although I found them, time and time again, they were nothing but the same men with different faces—the faces with the eyes that stopped just long enough to utter words of approval. Until I glanced at the eyes of the man in my apartment.

This time, I did not look away, under the shame-intended words. Instead, as I looked at him, I saw something new.

I saw a man who reached to the external for validation of his worth: the appearance of his girlfriend a metric no different to the outside world than his net worth. His business failing, his finances long collapsed, he was reaching to me to validate his success to the world.

As I saw his failings and compensations, I saw that I too, wanted external validation to cover up the things I wanted to hide.

I was no different than him.

For decades, until that man uttered those words, I had allowed my wit, my intelligence, my resilience, my drive, and my ambition to be buried under my bodyweight as the arbiter of my worth to men.

My fear of losing the approval of a boy in a junior high hallway or the men in my family eclipsed the things I valued most about myself, as I handed the adult measure of my worth to the men who gazed upon me.

I was afraid to be “too much,” so for years, I tried to make myself small—physically and emotionally.

Strength found me as I unwrapped my shame that December night. As I asked him to leave, I added the number on the scale to the front of my sentence to see himself out. This number, spoken aloud, was now an internal weapon of strength instead of an external scorecard.

The number now felt too light rather than too heavy, and I no longer cared what a man’s eyes could see when he looked at my body, trying to make me smaller than who I am.

I didn’t want to be anyone’s sparkly ornament ever again.

I could never fully please the male gaze, and this time, I didn’t even want to. In the silence of my apartment, my hair, clothes, and perfume now returned to me as the arbiter of opinion and hung in my mind only as decoration.