How One Book Changed My Life & I became Vegan. 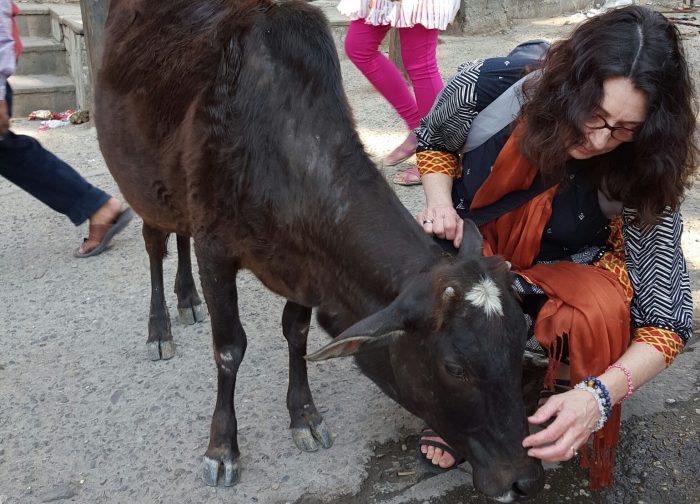 There are several compelling documentaries that extol the virtues of a plant-based diet.

But the thing that changed everything for me was the 1987 bestselling book, Diet For A New America.

It was early 1988. I was in the corporate world at the time, and as Vice President of a staffing company, I spent a lot of time on the freeways of Southern California.

“Talk radio” was a thing, and it sometimes kept me entertained while sitting in traffic. I was driving home one night, listening to L.A. radio, when I came upon an interview with John Robbins, author of Diet For A New America. The book is an exposé on connections between diet, physical health, animal cruelty, and environmentalism.

Listening to that interview that night changed my life.

I was a hippy child of the 60s. Of course, I had dabbled in vegetarianism. But I had never really connected the dots to the damage a meat-based diet was doing to my body, to animals, and to our planet.

John Robbins had been the heir to the Baskin-Robbins ice-cream empire. He had been groomed to take over the family’s business. But his life took a different turn.

At the delicate age of 21, John and his wife moved to a small island off the coast of British Columbia where they lived for six years, living on just $600 a year. While there, they grew organic food, did yoga, meditated, became in sync with the natural cycles of life. Their entire diet was plant-based.

John had polio as a kid, which left him with scoliosis, leg braces, and a limp. His new lifestyle miraculously healed his body. His spine and his legs became straight and whole again. Soon he would become an avid marathon runner.

After all that he had experienced, he realized that he could not, in good conscience, sell butterfat to the American public. He told his father that he was leaving the company and any financial support from the business.

He went on to research the cruelty of factory farming, the environmental impact of a meat-centered diet, the health and spiritual benefits of a plant-based diet and put it all into this extraordinary book.

John has become known as one of the most eloquent and powerful spokespersons in the world for a sane, ethical, and sustainable future. Listening to his interview was so compelling that I called my local bookstore to ask if they had the book. She said she had one copy left. I drove straight there to get it.

As soon as I finished reading it, I said to my husband, “I think you’d better read this book. It’s very compelling. I’m pretty sure I’m going to become vegan.” He got only halfway through the book and was 100-percent committed.

We both felt that this was a moral decision we were making. Sure, it would be good for our health, but more than that, we would be personally contributing to ending the torture of animals, and we would be doing something that was of great benefit to our planet.

People often say giving up meat and cheese would be hard. For us, it was easy. We bought a couple of vegan cookbooks, taught ourselves to prepare these wholesome meals, and dove right in. We felt good about what we were doing, and the food was delicious.

Going out to restaurants was a little tricky because we always had to ask a lot of questions upon ordering. Is there chicken broth in that pasta? Were those beans prepared with vegetable oil or lard? Does that rice have beef broth as a base? The answer was usually, “Let me ask the chef.”

Our work colleagues had interesting responses. One would apologize for ordering a steak. Another would drill down with the questions and rebuttals around why I would ever choose to stop eating meat. And another would say, “I would be vegan but I run on the anemic side so I have to eat red meat.”

My husband was at a dinner meeting one night with his colleagues and they all decided to play a joke on him. They had the waiter bring a potted plant, a flower actually, served up on a plate—dirt and all. They thought it was hugely funny. My husband laughed along with them and ate the flower.

We learned how defensive people are about their food choices. We weren’t crusading vegans. We weren’t trying to convert anyone. We simply placed our orders and ate our food. But people would often step up with unprovoked defensiveness.

In John’s book, he posits that when you stop eating the flesh of tortured animals, you stop taking this horror on to your own spirit. He suggested that once eating a plant-based diet, the spirit lifts.

About three months into our vegan diet, my husband and I were cooking. I said to him, “You know since we’ve become vegan, my spirit feels so light, so joyful,” He said he had noticed this too.

I guess John was right.

If you want to explore veganism, I highly recommend you read Diet For A New American or John’s latest book, The Food Revolution.

4 Ways to Stop Dysfunctional People from Leaving their Sh*t on our Doorsteps in 2021. The 4 Phases of Leaving a Narcissist (& the Answer to “Why don’t you just Leave?”) The Hypocrisy of Loving Puppies & Eating Piglets. The Silence of the Lambs: Why I Finally became a Vegan. How COVID exposed New Age Narcissism.
See relevant Elephant Video