My horror over the Ted Cruz scandal isn’t so much that he abandoned his constituents during an unprecedented crisis— it’s that he believed that it was just fine to do so.

Cruz is classic GOP. Get elected, and do nothing but spend taxpayer money to abuse your power & privilege. pic.twitter.com/WpdiKQRx8t

What the actual f*ck was Ted Cruz thinking?

As I went to bed Wednesday night, I was afraid. It was freezing outside. As in I was fearful that I might wake up to a house with no power, no water and/or a water pipe burst. The high that day had been 26. The low was 16.

It was day seven of freezing temperatures. Even though it was 26, it felt like 12. We were cold. We were fearful. It was stressful. We had done everything we could to prepare. My husband had filled up many five-gallon jugs of water, as we were told the water main could break. My daughter and I had loaded all the flashlights with batteries, charged cell phones, and made sure the backup battery chargers were good to go. And husband had dry firewood at the ready.

Imagine my surprise when I was perusing through Twitter shortly before bedtime and stumbled across a photo of one of our senators, Ted Cruz, boarding a flight to Cancun. Can-freaking-cun. As in Mexico—the land of margaritas and micheladas, white sand beaches and sunshine, something we hadn’t seen in Texas in days.

Just confirmed @SenTedCruz and his family flew to Cancun tonight for a few days at a resort they’ve visited before. Cruz seems to believe there isn’t much for him to do in Texas for the millions of fellow Texans who remain without electricity/water and are literally freezing. pic.twitter.com/6nPiVWtdxe

At the time, there was a debate on Twitter. “Was it him or not? Let’s not rush to the conclusion.”

I knew it was him though. He’s kind of a unique-looking guy, short in stature, quite round in the middle, and that ridiculous beard. And he was wearing the “Come and Take It Mask” he loves to wear to troll the libs, as it is associated with gun rights activist groups and has become a symbol of defiance.

There were many bright “Come and Take It” flags flying at the January 6th Capitol insurrection. Cruz wore that mask when he voted to overturn the election, he wore it to Biden’s inauguration, and there he was, wearing it at the airport as he jetted out of the dire predicament Texans faced, so he could escape the cold and bask in the tropics with his family.

I was incensed. Almost immediately, my Twitter feed brought me a post from Beto O’Rourke. He had set up a phone bank. He and his team were checking the elderly and making sure they had warmth, food, and water. If they didn’t, they were connecting them to those badly needed resources. While Ted Cruz, the senator who beat Beto O’Rourke in 2018, was escaping to Mexico. This was wrong on so many levels, it made my hands shake.

We made over 151,000 calls to senior citizens in Texas tonight. One of our vols talked to a man stranded at home w/out power in Killeen, hadn’t eaten in 2 days, got him a ride to a warming center and a hot meal. Help us reach more people, join us tomorrow: https://t.co/WOLn2HCrm1

As everyone knows, because it has been copiously covered in the media, Ted Cruz almost instantaneously realized his mistake.

My guess is while he was sitting on that airplane, he saw the Twitter uproar, even though he claimed he was having doubts. And then, probably much like myself, he stumbled across the heroic efforts of Beto. By the time he landed, I suspect he was pooping his insurrectionist pants.

Not surprisingly, he flew right back the next morning and started peddling lies and excuses blaming his poor decision on his children (because that’s noble), (oh, and shocker, a Republican lying), and trying to save even a shred of dignity for himself by going on a save face rightwing media tour that night. Sean Hannity, of course, was more than happy to have him on and try to help resuscitate his miserable reputation.

Cruz: I had initially planned to stay through the weekend pic.twitter.com/EgxxnBXCXW

Gosh, Cruz’s poodle, Snowflake is all Texans. Abandoned in the dark. pic.twitter.com/X6rvQr0j7q

By this time, we all knew about “Snowflake,” the abandoned poodle. Because, of course, he abandoned his dog in his harebrained attempt to escape the suffering his millions of constituents were enduring. How out of touch do you have to be to make that decision?

I sincerely believe he was so into cos-playing the chic-insurrectionist-in-your-face-you-libs, that he genuinely thought it would be fine for him to leave the state. Why else would he wear that infuriating mask? Did you notice when he tucked-tail and came groveling home he was no longer wearing it?

So here’s my question for my fellow Texans: can we all agree now that the GOP is worthless?

What is it going to take?

The Texas power failure was a catastrophic mistake that was entirely avoidable. Sure, the GOP is trying to blame it on wind turbines and solar panels. As has been widely reported, this argument is bogus, as those two forms of energy account for six percent of the overall energy infrastructure.

The reason the failure happened to the extent that it did, was because, despite warnings in 2011, the three Republican governors since 1994—George W. Bush, Rick Perry, and Greg Abbott—have refused to enforce winterizing regulations at any of the power sources: natural gas, nuclear, wind, and solar. Add to that, Texas’ belligerent commitment to be energy independent, and voila—catastrophe!

There are, of course, many other factors here. Still. It could have been avoided. And, of course, they’re lying about it. Lying is the Republican brand.

I am begging Texans to reconsider the allegiance to being a red state. Enough. We have to stop electing those who don’t believe in government to govern. Haven’t we suffered enough? At this moment, 26 people died in this freeze (and counting). It’s estimated to be 18 billion dollars in damages (and counting). Enough. We need leaders. We need people who care.

Remember, while Ted Cruz tried to escape to the tropics and leave us all here to suffer, Beto was saving the elderly. Let that sink in. Enough. 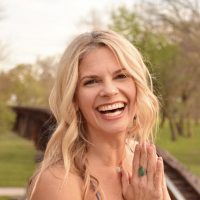 Rebecca Butler had two yoga studios pre Covid. Now they are both closed. She is a diehard blue in a red state, doing her best to flip the great state of Texas. She lost both h… Read full bio