I Love Animals: Is it Rude to Refuse an Invitation to a Summer BBQ? 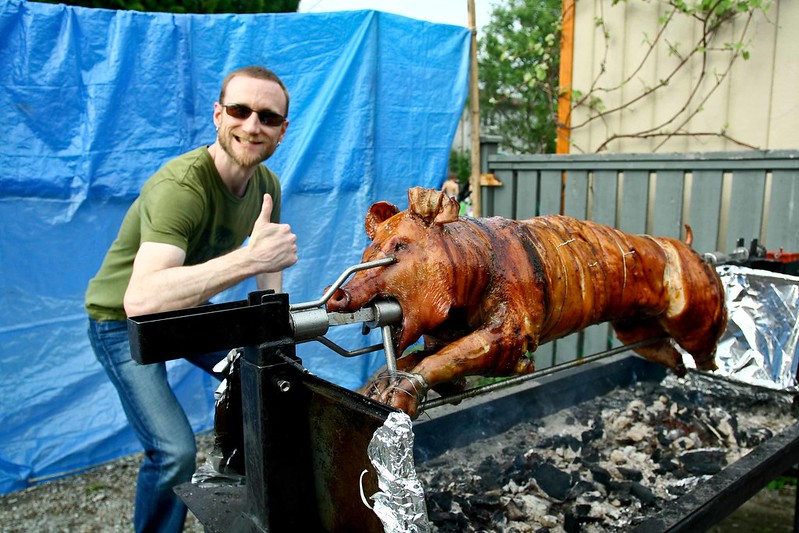 Julia, a woman who I had just met, wanted to thank me. I had found her dog who had escaped the day after she’d adopted her. I found her roaming on the streets, looking at me with a please-don’t-leave-me look in her eyes, so I stayed with her the whole day and eventually took her home. With help from the local police, I was able to find the owner, Julia.

Quite happy about being reunited with her newly-adopted lost dog, Julia invited me to her BBQ party that Sunday. “We would love to have you over,” she said. I felt some hesitation but appreciated her spontaneous gesture. We exchanged our telephone numbers and I told her that I would message her. Her Spanish words left her mouth so rapidly that I had to do my utmost best to understand her.

The rapid flow of Spanish words wasn’t the only reason. I realized I just wasn’t sure if I wanted to be at a BBQ, where—of course—meat and/or fish are served. I can’t even remember when I was at a regular BBQ since I decided to stop eating animals.

Days passed by without me even thinking of the invitation until I received a WhatsApp message. Julia asked me if we wanted to come to her BBQ, and she also wanted to know if my partner and I ate meat. I decided to just share my feelings with her. I thanked her for the invitation and told her that we didn’t eat meat because we followed a vegan lifestyle—that we only eat plant-based food. I told her that I (I didn’t want to speak for my partner) preferred not attending BBQs where animals are eaten. I didn’t want to be rude—or ungrateful—so I weighed my words carefully.

Spain has a solid meat- and fish-eating culture.

Spaniards eat more meat than any other EU country (the average Spaniard puts away more than 1 kg a week), slaughtering 70 million pigs, cows, sheep, goats, horses, and birds each year to produce 7.6 m tonnes of meat. In a country facing rapid desertification, in the coming decades, it makes little sense to use 15.000 liters of water to raise each kilogram of meat.

Last week, the Prime Minister of Spain, Pedro Sánchez, said on television in precise words that to him a medium steak is “unbeatable,” undermining the brand new nationwide campaign “Menos Carne Más Vida” (Less Meat More Life) by the Minister of Consumption/Consumer Affairs. This campaign was launched recently to bring awareness to the Spanish people of the need to reduce meat consumption for health and environmental reasons.

“Okay,” she said, “if you ever need anything, you have my number.”

I have changed. Since I learned more about the environmental impact of meat and fish consumption by humans, and what harm and suffering that causes to the animals—in Big Ag and in slaughterhouses—I’m done. I can’t go back to consuming products that contain suffering, stress, torture, and death. I can’t. I don’t want to be part of it.

A few years ago, friends and family from the Netherlands and New Zealand came to visit us in our new home in Ibiza (where we lived back then). It happened to be my birthday around the time of their visit. New Zealanders love to barbecue, and I knew they would love to eat some good meat and fish. One of our friends, who is a chef, organized the BBQ. We served lots of chicken wings, steak, beef, sausages, and salmon—because that’s what you do at a BBQ, right? Coming together and having beers, wine, and fun while there’s meat on the grill, emanating that particular scent of grilled flesh. To me, it has always been the scent of summer afternoons. I was a pescatarian back then; and though I had already read a lot of literature regarding the horrors of animal farming, I still wanted to please my family and friends. Not anymore though.

When I said to Julia I couldn’t come, I wondered: am I too sensitive? I, who occasionally shivers reading of “woke and cancel culture” that is inclined to censor those who don’t think the same as them. Freedom of speech that isn’t so free anymore.

In these current times of polarization, it seems we can’t discuss differences in opinions in a healthy way. Many a time, we feel insulted, hurt, and attacked when important topics such as racism, discrimination, inequality, and climate justice arrive to the often heated conversations as we’re expressing our politically correct opinion.

We live in our own bubbles; an environment in which we interact with like-minded people who all think more or less the same thoughts and have the same ethics as we do. Both in the real and in the digital world, enforced by the pandemic.

I’m aware that I live in an ecological and vegan bubble. And I know damn well that veganism is a lifestyle not everybody agrees with, because we simply aren’t preoccupied with the same things.

We will always live in a world where animals are killed and used for human consumption, because for many people, animals are objects and food, not autonomous creatures who feel emotions like pain, stress, and grief. Besides, giving up meat and dairy for environmental reasons is still non-negotiable for the majority of people.

Once, I was at a BBQ for which a friend had slaughtered one of his lambs. One of my friends, who was vegan, was also invited. I said to her that I would understand if this wasn’t her kind of party. I also had my doubts, but we decided to go anyway. The lady of the house was surprised to see us not eating. We could see with our own eyes where the meat came from: a healthy and loved animal who she had taken good care of since he was born. So why didn’t we take some of the meat? We said we just wanted to enjoy the company of the people and some drinks but not the food, as we were vegetarian (I) and vegan (my friend). My friend asked her if the little lamb had perhaps been given a name. The host replied indignantly, “Oh no, of course not. Had we given it a name, we would never ever have killed it.”

My friend and I looked at each other, blank-faced. To us, it was a confirmation of our beliefs, and we finished the bag of chips in our hands.

If I had more energy left in the summer heat that Sunday, I would have cooked some vegan dishes to take with me to Julia’s BBQ. Lentil burgers and almond cheese, homemade hummus, and veggies from the garden. Instead, I stayed home in my own vegan bubble because I didn’t want to be confronted with flesh on the grill and witness people enjoying it.

Maybe BBQ-loving friends and family are reading this and thinking, “Oh no…why is she being so silly, totally lost in her own vegan world!” Changed…yeah. I have changed because I no longer wish to fit in and please my friends and family.

If I am patient and want to step out of my vegan bubble, I shall cook and bring you tasty and nutritious food for which no animal had to be exploited and killed. And we would drink and dance together till the early morn’.

* James Aspey is an Australian fitness coach and animal rights activist who speaks of an animal holocaust. He is known for remaining silent for an entire year to raise awareness around cruelty toward animals.

Why Vegans Hate Me. Satisfy your Sweet Tooth with this Delicious Vegan Lemon Pudding. {Recipe} 7 Ways to Stop our Fear of Abandonment from Turning us into Emotional Vampires. The “Introvert Hangover” Struggle is Real. How to Beat It.
See relevant Elephant Video