John Oliver explains Critical Race Theory & Why it causes so much Drama at School Board Meetings. 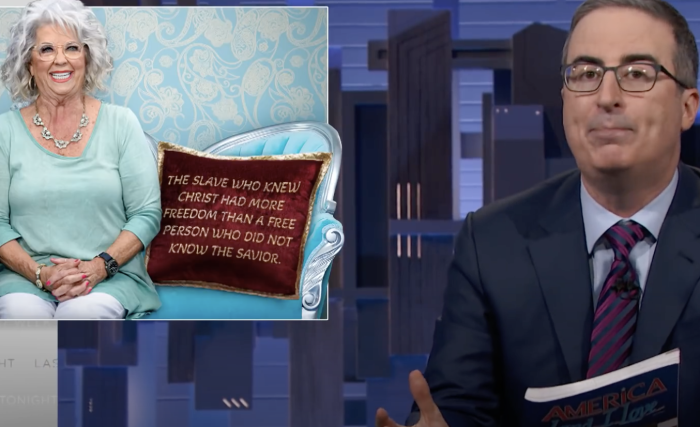 John Oliver kicks off the new season of “Last Week Tonight” with a much-needed conversation on Critical Race Theory (CRT).

I can hardly express how happy I am that he did that. But I am also aware that some folks are already upset and call him a communist.

There aren’t many topics that get White parents more riled up at school board meetings than CRT. But why is that?

Oliver perfectly explains how most parents and Tucker Carlson don’t actually know what CRT actually is. The main goal of Conservatives was to frame the entire conversation on this topic as an attempt to implement Communism in the United States.

And that strategy worked out.

The compilation of angry White parents shows us what really drives these parents who insist on a ban of CRT. One of the main arguments is that learning about the history of racism discomforts White children. And it wouldn’t be too far-fetched to assume that we are also talking about the guilt and distress it causes for these parents.

But what about the Black children? What about their parents? Don’t they have to deal with racism anyway? Wouldn’t it create more empathy and a sense of community if White children had more awareness and sensitivity toward systemic racism?

If you are against CRT being taught in schools, please watch this episode of “Last Week Tonight.”

But I would like to add another perspective on this topic. I am talking about the accusation that CRT promotes Communism in America and the roots of critical thinking.

As some of you might know, I am German. I grew up in Frankfurt, Germany. And I studied sociology at the University of Frankfurt, which is known for the teachings of the so-called “Frankfurt School.”

And yes, these philosophers also used quotes from Karl Marx to back up their claims. But they also refer to Immanuel Kant, Max Weber, and Georg Wilhelm Friedrich Hegel, who do not represent any Marxist or communist ideas. Calling these scholars communists couldn’t be much further from the truth.

But, and that’s quite important for the conversation on CRT these days, there are Conservatives who label any type of dialectical method as Marxism. And that’s what gets me really angry.

How is reasoning a communist thing? And if it was, what’s the opposite of that? Patriarchy? Authority? Dictatorship?

People in Germany also hated these critical thinkers back in the 60s. The reasons for that were quite similar to what we are seeing today in the United States at school board meetings.

The German middle-class in the 60s was well-aware that Germany f*cked up. Everyone knew that the Nazis killed millions of people. And most people had relatives involved or guilt because of their own actions. There are books about the inability of German’s to acknowledge the cruelties of its darkest days that led them to avoid the topic.

That was the main theme of post-war Germany. Everyone knew what happened, but everyone was so ashamed that nobody wanted to talk about it. Does that ring a bell? Does that remind you of anything we see today?

Does anyone really think that there is nothing in American history to be ashamed of?

But now, I hear parents who are worried that their kids might feel guilty when hearing about these ugly parts of history. Why would they feel bad about themselves? Isn’t this more based on a fear that they might ask uncomfortable questions about their own ancestors?

And that’s where it all starts making sense why we need critical thinking more than ever. As a German, I can tell you that this philosophy was extremely helpful to find a new identity for a society known for the worst crimes in history.

It’s not the fault of a White kid in the Midwest that slavery existed, but it’s the responsibility of society to be aware of it. The main reason to learn history is to avoid making the same mistakes over and over again. The main motivation of critical thinking is to enable the individual to make the right decision without running danger of falling for misinformation and propaganda.

And we need that more than ever.

Critical thinking and CRT help us overcome stereotypes, prejudices, and individual guilt—and replace them with dialogue and reasoning. And I totally understand why someone like Tucker Carlson is scared of that.

If people were able to think for themselves, we wouldn’t have to deal with a Republican party who runs one campaign after the other based on comforting White voters by defending the toxic status quo.

And that’s the saddest part about this. The parents who follow the talking points of conservatives don’t even realize that they could better their own situation by applying critical thinking.

Why does a poor person vote for someone who cuts taxes for the richest? Why does a person who has to work three jobs to pay the bills vote for a party that is against minimum wages? And why does anyone who has a daughter argue against the “Me too” movement?

I understand why Conservatives are scared of CRT, but I haven’t heard a single argument why that should stop us from teaching it in schools. It’s scary for these parents to admit that parts of the so-called American dream are based on inequality, racism, and propaganda.

And if discussing certain topics automatically leads to feelings of guilt, maybe that’s okay? Maybe that’s necessary to evolve as a society? It’s time to acknowledge that CRT is not destroying our society; it’s a way of thinking that actually saves our society from falling apart.

I am not proud to be German. I am ashamed of what my ancestors did. I never want any of this to happen again. But I am also proud that almost everyone born after the 60s feels the same way.

It’s not our fault that sh*t happened before we were born, but it’s our duty to learn and evolve.

Dear friends in the United States, don’t be scared of CRT—be scared of those who argue against reasoning and logic.

I hope you enjoy watching this episode of “Last Week Tonight.” May it be of benefit!