The Primordial Face of Darkness. 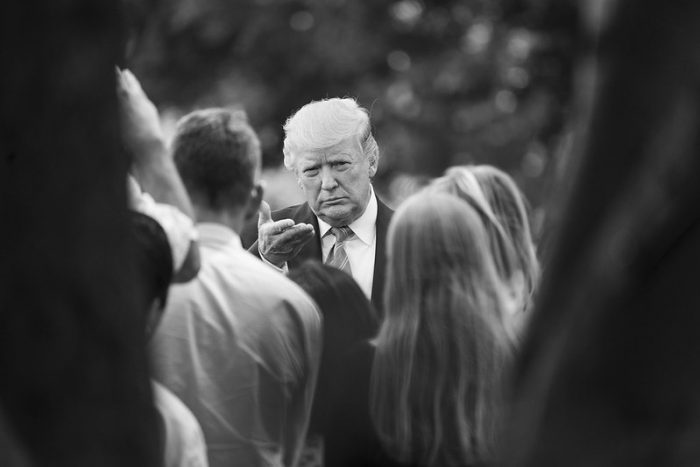 We have seen it before in every myth where evil reigns supreme.

Fascism is the same primordial face of darkness that appears in every myth where evil reigns supreme—and it is the same darkness creeping over our lives today. It shrouds its pronouncements in a cloud of lies and forces its adherents to defend its contradictions. It tears toddlers from parents, rips the wombs from immigrants, corrupts gentle grandmothers, and perverts the ambitions of proud young men.

Cruelties like these are timeless, so if we want to understand them, we need to look deeper into the nature of humanity. But the forms they assume are contingent, so if we want to make sense of the shape they have taken today, we need to articulate how the primordial face of evil has crept back into our lives. And yet, while criticism of Trump is ubiquitous, few have ventured to characterize the despotic archetype he represents.

Scholars of fascism almost uniformly tell us fascism is a 20th-century doctrine. But they also told us Trump was not threatening democratic institutions or dependent on extrajudicial force when he first came to power—and that just looks silly in 2020. The most prominent Holocaust scholars, like Timothy Snyder and Christopher Browning, on the other hand, were more prescient, seeing the ghosts of fascism haunting 21st-century America.

Trump behaves like Mussolini and governs like Hitler, arguably more so than any leader of a major Western power in the past century and a half (and before dismissing the claim, see if you can find a better example). He exhibits the same racism, sexism, hyper-nationalism, and authoritarianism. He has created the same cult of personality, reinforced with the same attacks on the weak and marginalized. He lies as profusely, governs as tyrannically, mobilizes the same resentments, and inspires the same hate.

Yet, the values commonly associated with any given stage of development are also present in every stage of development, because each of us passes through them on our own personal paths of development. In this way, we carry within our hearts the lessons of history, and we move humanity forward as we open our hearts and minds. Enlightenment thinkers of the 18th century, like the French Condorcet, first popularized this view, but it has now been filled in with over a century and a half of social science research. Thus, Wilber has been able, with some controversy, to locate every major thinker and ideology on a vast map of consciousness.

However, the recent research of political psychologists, like Jonathan Haidt, suggests that there is a range of personality styles commonly associated with a set of political perspectives that is remarkably constant across space and time. Thus, liberalism might appear as magnanimity in agricultural societies as suggested by Aristotle, respect for democratic institutions in industrial societies as suggested by John Stuart Mill, and the inclusion of marginalized minorities in postmodern societies—but it is the same liberality of spirit at every stage of development.

In this way, fascism this time need not look exactly like the last time for it to be expressive of the same psychosocial tendencies—but its link to ancient and mythological despotism is critical.

Baron De Montesquieu noted in the 18th century that despotic rule assumed a unique form at every different stage of socioeconomic development. The despotism of tribal warlords may be distinct from that of the Roman Nero, but there is a family resemblance in their abuse of power. In this way, fascism is simply another form of despotism, updated for a democratic age. Thus, making sense of it means looking past its historical manifestations to its primordial tyrannical tendencies.

In this sense, fascism is simply the mobilization of evil in pursuit of power, and its roots may predate our humanity. Leaders like Trump draw from seemingly instinctive cruelties, after all. So, perhaps it was not so strange that my first epiphany around its timelessness occurred while watching The Lion King. Despots have been with us since at least the beginning of recorded history; thus, there is an expression of it for every stage of sociocultural development. Sometimes, it gathers the most brutal clan leaders in a great genocidal horde; sometimes, it mobilizes the resentments of petty court officials.

But despotism undergoes a radical change as soon as we enter the democratic age, for, in order to succeed, it must mobilize the masses. And mobilizing the masses in pursuit of despotism requires the concoction of endless enemies threatening to keep them down. It might be communist Jews, terrorist Muslims, immigrant Mexicans, or smug Liberals. But in a democratic age, the threat is likely to divide society at its joints. And the emotions it evokes play on a ressentiment bred of insecurity in a complex world. This makes the industrial and postindustrial variants of despotism uniquely regressive—and recognizably fascist.

In this sense, fascism is simply the modern manifestation of a force of darkness that might, at any moment, corrode the highest values of a society. It is the same despotism we have seen mythologized in countless fairy tales the world over, where despotism is accompanied by hatred, anxiety, desperation, and depression. Yet, it is uniquely dangerous in democratic societies where it is forced to corrupt an ever-larger number of people in order to maintain power. Fascism is despotic rule by the masses, who use their power to bully the rest into submission.

And in demonstrating what it looks like when evil reigns supreme, the fascism last time might give us clues to what comes next if it is not stopped in the coming election.

If Trump Remains in Power. Why Trump could Prove More Dangerous than Hitler. It is Time for Men to Look at Donald J. Trump & Find Ourselves.
See relevant Elephant Video