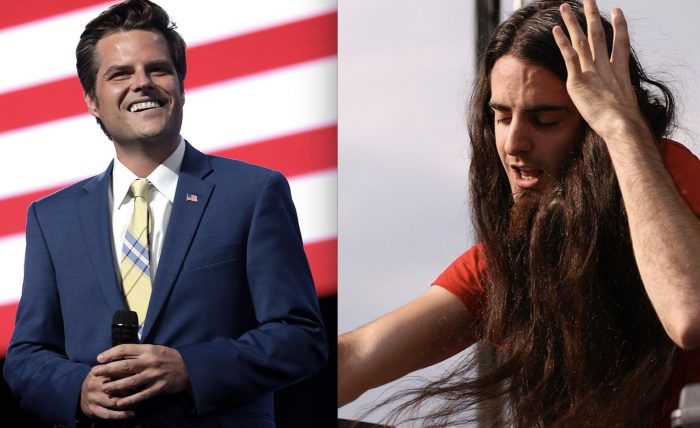 While Matt Gaetz is facing charges of inappropriate sexual relationships, several media outlets are reporting on the fall of the “Bassnectar” empire—two totally unrelated investigations, but they allegedly have one thing in common.

You may have heard about the investigations of Matt Gaetz, and if you are into electronic music, you might have wondered why Bassnectar ended his career.

Both of them had been accused of questionable behavior toward young women (and underaged girls).

Initially, both men tried to portray themselves as victims of “Cancel Culture,” but they were not able to stop the outrage on social media. After bigger media outlets starting to report, more and more women came forward and shared their stories.

Of course, we can’t say for sure that all these accusations are true, but it is undeniable that there should be further investigation, as well as a deeper conversation about the dynamics behind these stories.

Last year, I heard about the allegations against Lorin Ashton (Bassnectar) because someone close to me used to be part of the “cult” around the handsome DJ. I was infuriated by the thought that a man who pretends to step up for women’s rights and runs charities for the victims of abuse might be a predator himself.

With the help of my friend, I reached out to others involved in this story. I spoke to several people who claimed to be victims; I wanted to write about it—but I wasn’t able to share all my information.

The reason is that I can’t afford legal protection when speaking up against those in a position of power. So I did what I could and collected information, wrote articles using the word “allegedly” as often as possible, and kept the most troubling pieces of information to myself. Besides many other victims (who I partly encouraged), I reached out to several media outlets to report on this story.

Last year in August, I knew that VICE Magazine was on the case, but I was told that it would take some time as they had to properly investigate the allegations. Last week, when their article came out, the victims I spoke to, my friend who steered my attention to the case, and I felt relieved.

And I don’t blame anyone that it took so long—we have to maintain the ethics of journalism, especially when a story has the potential to ruin someone’s career. But that doesn’t mean that we have to stay completely silent about it either.

Now, we are confronted with the allegations against Matt Gaetz. We see a similar dynamic as in the Bassnectar case: once the news breaks, there are several more victims willing to raise their voices.

My point is that it is perfectly fine that—as an author—I am not allowed to write articles based on “hearsay,” but I would hope that victims are able to get legal support without getting threatened by the offenders.

One of the alleged Bassnectar victims quoted in the article on VICE Magazine insisted on not using her real name because she still works in the music industry, which is based on the fear of not getting any jobs in the industry after speaking up.

During my investigations, I found out about a website founded by someone who claims that love is “a concept invented by poor people.” His service goes by the name “Seeking Arrangements.”

“Every successful relationship is an arrangement between two parties. In business, partners sign business agreements that outline their objectives and expectations. Likewise, romantic relationships can only work if two people agree on what they expect, and what they can give and receive from each other.”

If we combine the notion that love was “a concept invented by poor people” and this quote, we get an idea of what “Sugar Babies” are expected to deliver as “‘attractive people looking for the finer things in life.”

It is not upon me to decide whether this website is enabling forms of sex trafficking or prostitution, but isn’t it interesting that the former wingman of Matt Gaetz, Joel Greenberg, allegedly used the website to organize the parties and weekend trips that are under investigation right now?

What Gaetz and Bassnectar have in common is that they were in a position of power that allowed them to share their wealth in exchange for “company”—they were allegedly seeking arrangements.

Bassnectar claimed to protect women from toxic masculinity, and Gaetz not only supported Trump and “The Big Lie,” but he was also backed by several QAnon supporters (who used to run on the slogan “Save the Children”).

What an irony that both of them are facing allegations of behaving in exactly the opposite to what they claim to stand for?

I am afraid that both of these cases are just the tip of the iceberg. “Seeking Arrangements” claims to have 20 million users worldwide—so this is not only about two men.

It is sad to say, but it seems these folks have set up a parallel society with a different set of morals and ethics that attracts rich men and women who are willing to do anything it takes to live a life of luxury.

This brings up a few questions that I hope will inspire a broader conversation:

1. How does “Hush Money Culture” relate to outcries on “Cancel Culture?”

2. How does celebrity culture feed into this dynamic?

3. Who pays for all these trips of influencers, models, and aspiring actresses?

4. What is the difference between an “arrangement” and prostitution?”

5. What can we do to protect our daughters from thinking about being a “Sugar Baby?”

What am I missing here? How can we move forward and break the toxic cycle of “Hush Money and Seeking Arrangements?”