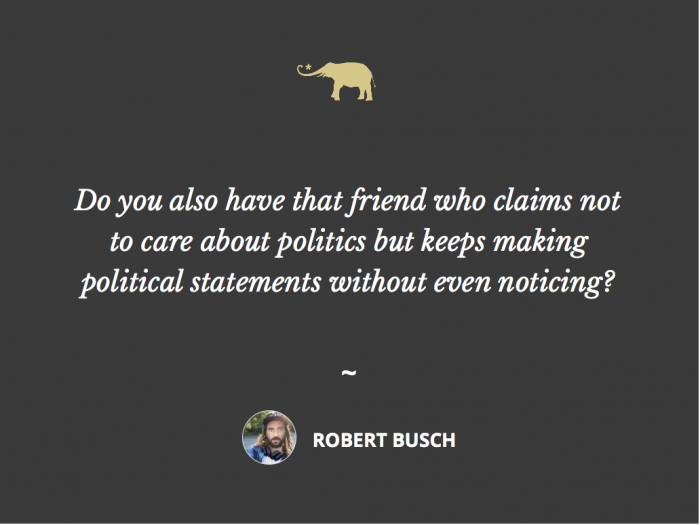 Do you also have that friend who claims not to care about politics but keeps making political statements without even noticing?

As a yoga teacher and traveler, I have more than one of these friends. And I normally like these folks, but the last years have been rough.

I remember some weird statements from friends during our yoga teacher training, but it never really bothered me. I overheard several sexist remarks made by surfing buddies because I didn’t feel like arguing in the water. And, of course, I always had buddies who hold different political views than I do.

And all of that is a part of life. But since the pandemic started, things have changed. All of a sudden, our political perspective matters more than ever—mainly because the following actions affect all of us.

Years ago, it didn’t matter to me when a yoga mom proudly told everyone that she wouldn’t get her children vaccinated against measles. The real estate dude who practiced yoga next to me who makes a quick buck with selling overpriced lots in a nature reserve was not someone I would argue with after class—and I would like to keep it like that.

What really bothers me is that these folks always claim to be nonpolitical. When there is an argument on whatever topic, they will often end the conversation by saying, “This is all politics; I am not into that.” Sounds familiar, right?

Everyone can decide for themselves not to participate in the political debate. Therefore it is also their right not to follow the news. There are folks who claim that news gives them anxiety—well, then don’t watch the news.

At the same time, I have bad news for these folks: being nonpolitical is impossible. Let that sink in for a moment.

My point is that the world will keep spinning, politicians will make decisions, and people will have opinions. Not following the news or staying away from facts only excludes someone from the ongoing conversation—it doesn’t stop politics.

I feel that not caring about facts, not thinking about the challenges of our time, and not taking any action to make this world a better place is quite ignorant—but hey, everyone is free to choose, right?

Yes, but choosing something also includes dealing with consequences. If you choose not to know much about politics, please respect my choice that I won’t listen to your bullsh*t opinion on Afghanistan, COVID-19 vaccines, or Black Lives Matter.

I know that this is a harsh statement, but seriously, why would I spend time debunking arguments that are not even based on reality?

Unfortunately, we have reached a point where many folks are not able to differentiate between valid political viewpoints and right-wing propaganda. Often these folks claim to be “the least political person you know.”

Lately, I saw many of these folks bashing President Biden because of the political disaster in Afghanistan. They were upset about the soldiers who got killed in a terrorist attack at the airport of Kabul. Some of them were upset about the money spent during the 20 years of war in Afghanistan. And others claim that none of this would have happened with a Trump administration.

And that’s where my head is about to explode.

I ask them, “Which party was in power when the war started?” and the answer is, “I am not into politics; I just feel it’s a shame what is happening in Afghanistan.”

I ask them, “Who profited the most of this war? Stocks of private security companies or the people of Afghanistan?” and the answer is, “I am not into politics; I don’t want to pay for this.”

And that’s exactly what makes politics complicated: there are no easy answers.

COVID-19 showed us that relying on our gut feeling is not the best way to deal with a pandemic. Countless anti-maskers and anti-vaxxers had died because of this virus—no matter if they believe in it or not.

The pandemic taught us a lesson on what happens when the public gets tricked into believing a narrative that is not based on facts but on a gut feeling. It was easy for the Trump administration to find folks who are willing to oppose mask mandates and lockdowns—because nobody likes wearing a mask or being in a lockdown.

And that’s the same dynamic we saw during the Black Lives Matter protests. After George Floyd Jr. got killed, we saw the rise of Candace Owens as a political actor. She basically claimed that the absence of fathers in Black families caused all the problems Black people are suffering from.

I don’t deny that absent fathers can create a whole bunch of problems, but what about the systemic racism that got George Floyd Jr. killed in broad daylight? Why not talk about that?

But our nonpolitical friends shared the sh*t out of her viral video hit and made her a superstar on Fox News.

So, here is my question to all these nonpolitical folks, “How come that you supported Republican policies three times in a row without being political? You rejected science on COVID-19, bashed Democrats on Afghanistan, and spoke up against the Black Lives Matter movement—don’t you see this pattern yourself? You are political as f*ck.”

As mentioned in the beginning, everyone is free to have their opinion and choose how much information they want to gather before expressing it—but don’t expect me to tolerate your GOP propaganda without calling you an entitled conservative person.

This was your choice, not mine.